An introduction to Kailh switches, including Speed & Box

The most popular article we’ve ever published is a guide to Cherry’s MX switches, which lie at the heart of many mechanical keyboards. However, Cherry are far from the only company producing switches these days, and one increasingly popular alternative are Kailh switches made by Chinese firm Kaihua Electronics. Here’s everything you need to know.

What Kailh switches are there?

There are three main families of Kailh switches:

Like Cherry MX switches, different Kailh switches have different colours and corresponding characteristics. We’ll cover each of them in turn, explaining how their construction differs and what they’re like to use. After that, we’ll look at some other common questions and answers regarding Kailh switches.

Kailh produce switches that operate near identically to Cherry’s original designs; these are legal clones. If you’re familiar with Cherry’s switches, these Kailh alternatives require little introduction: Blue is a tactile and clicky switch, Brown is a tactile switch, and Red is a light linear switch. We’ll call these Default switches, in absence of any existing nomenclature.

The Kailh Silver switch is much like Cherry’s Speed Silver: a light (40gf) linear switch with shortened travel (3.5mm) and actuation (1.1mm) distances. 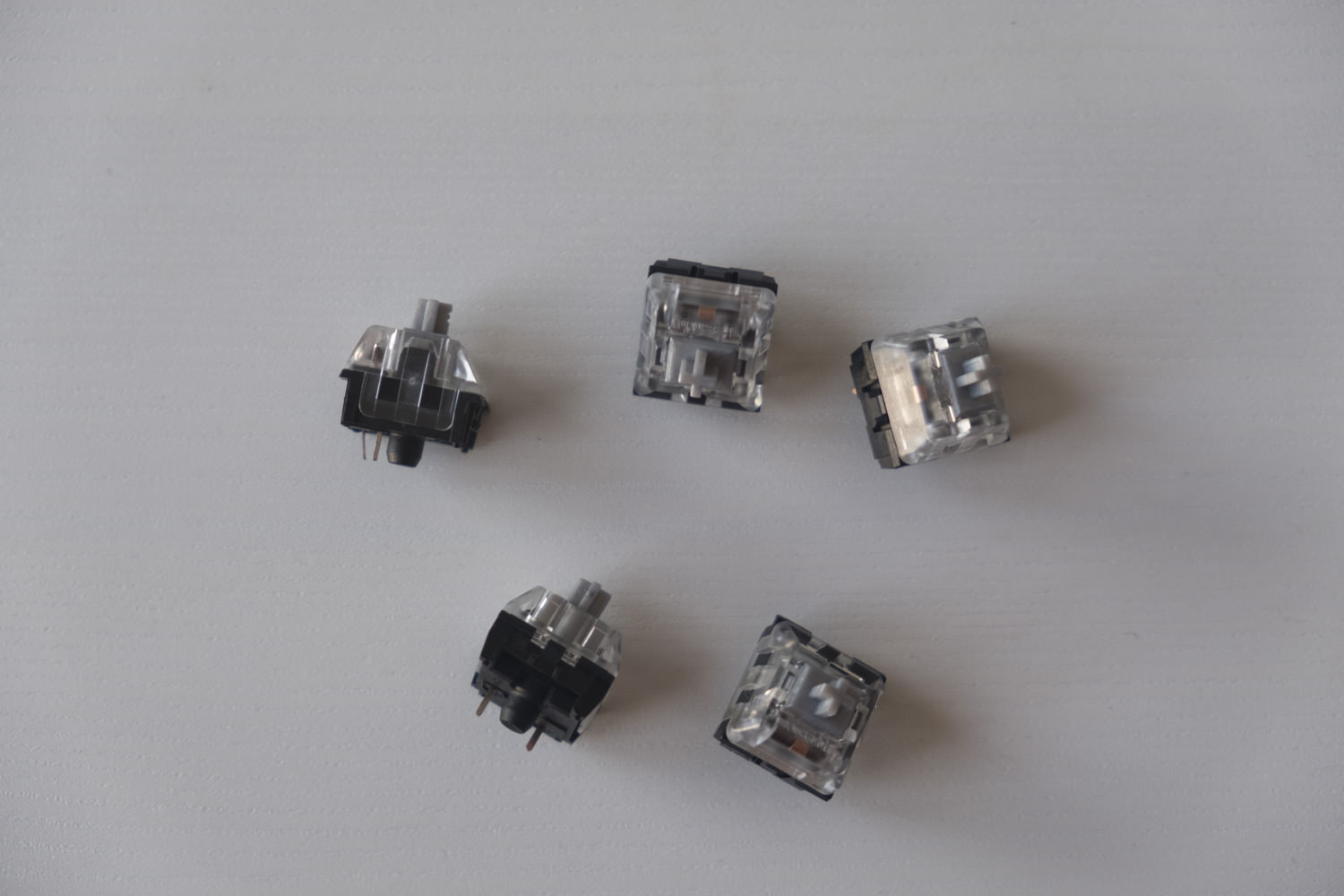 The Kailh Copper switch is a soft tactile switch, with a (50gf) tactile bump and an actuation point just 1.1mm into its 3.5mm travel distance. Combined with its light (40gf) actuation force, and you’ve got a switch that can handle both gaming and extremely rapid typing — definitely one to try. 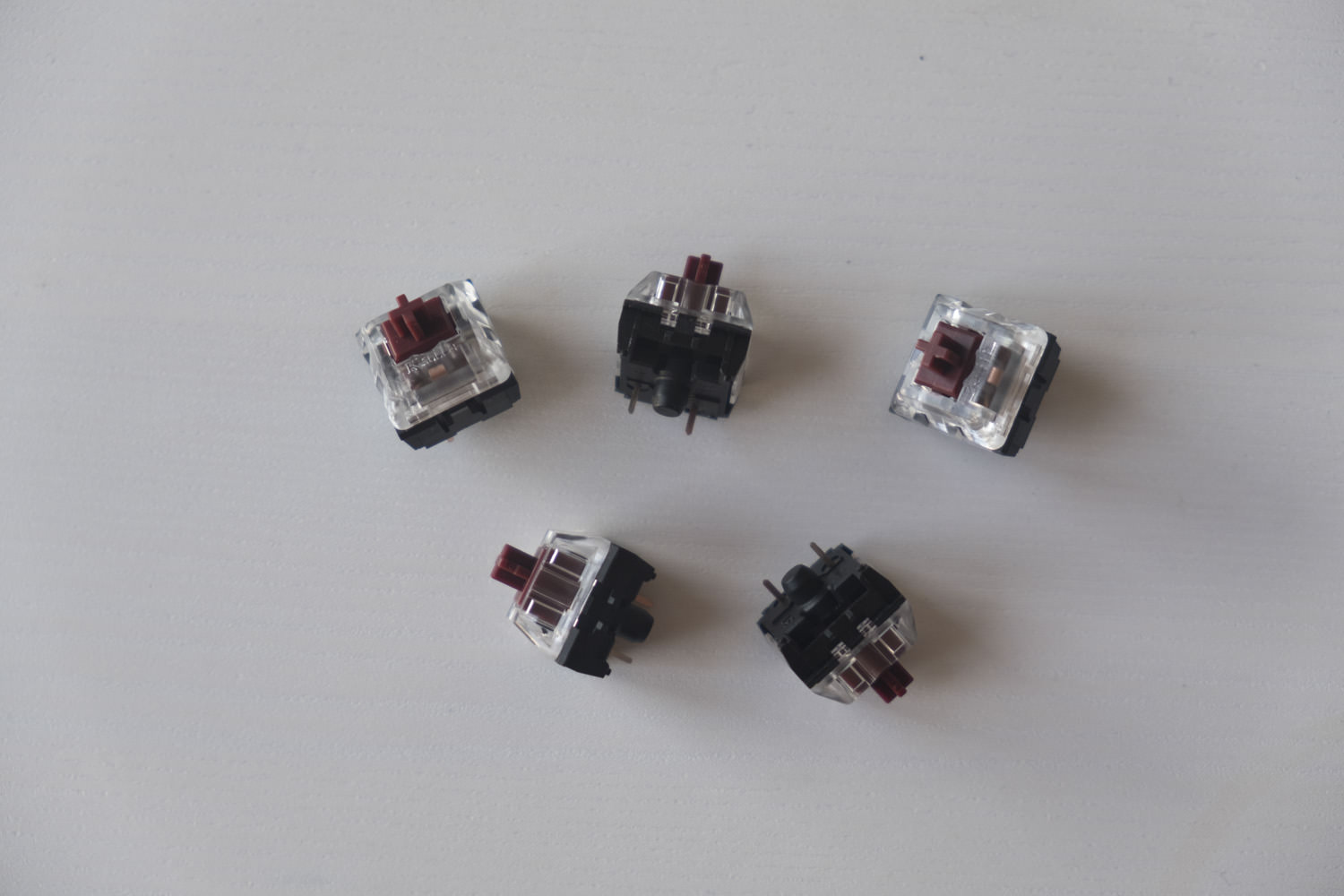 Kailh’s Bronze and Gold are both clicky speed switches, very similar to Cherry’s Blue switch with the same audible clicky feedback, but with shorter travel and activation points. 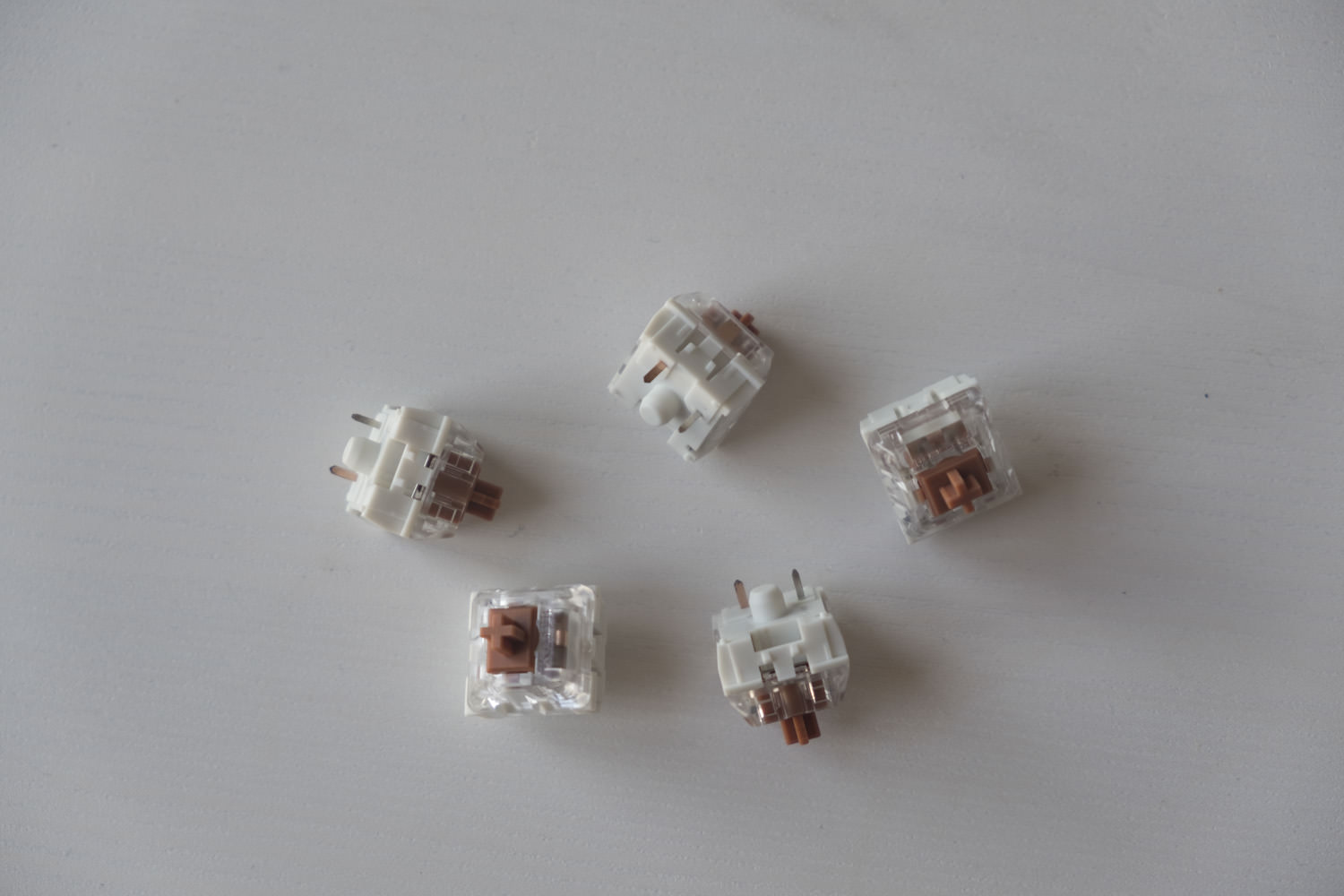 The Kailh Gold is closest to the Blue switch, with an actuating force of 50gf, a tactile bump requiring 60gf, total travel of 3.5mm and an actuating point of 1.4mm to make it more suitable for gaming. 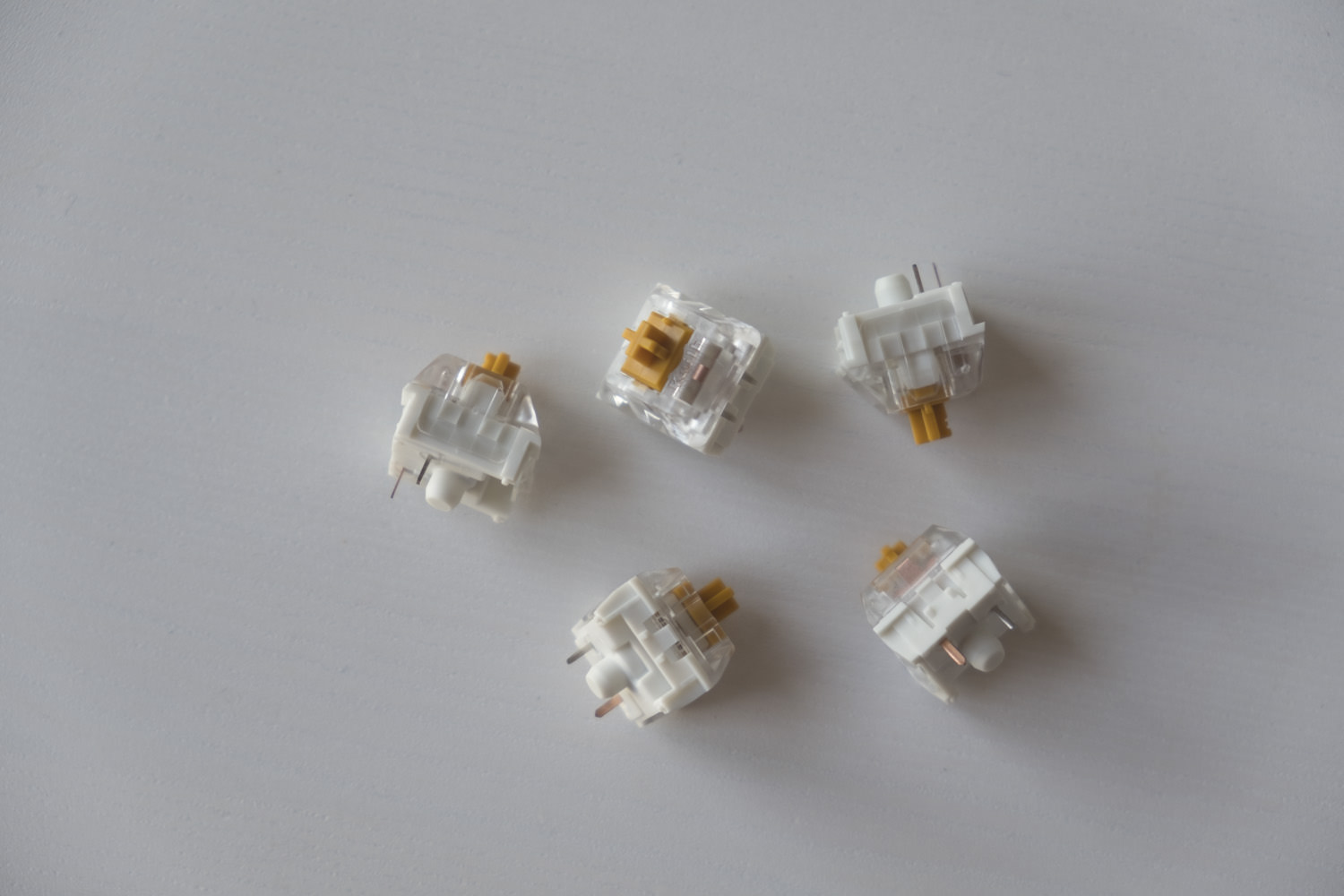 So, to sum up, here are the four speed switches, a brief description, their actuation/tactile force and actuation point. Identifying a Kailh box switch is pretty easy: just look for the box enclosure that surrounds the familiar cross-shaped MX style stem. This box protects the switch from dust and moisture, and provides an IP56 resistance rating. However, the mechanism means that they’re only compatible with SMD LEDs, rather than the (slightly more common) through-hole LEDs. Interestingly, each Box switch has the same travel and actuation distances: 1.8mm for actuation and 3.6mm in total. That’s a little shorter than the Default switches, and you can feel a bit of a difference when it comes to speed.

Here’s a YouTube video by Kailh that shows off the new switches:

Once again, here’s the summary:

How do you pronounce Kailh?

Kailh is usually pronounced the same as kale, that leafy cabbage. However, it’s a Chinese word and other pronunciations are relatively common.

Are Kailh switches as reliable as Cherry ones?

Based on on our own testing and general sentiment in the mechanical keyboard community, Kailh switches are every bit as reliable as those made by Cherry. The company has been making switches for decades, and its new models show the company’s interest and skill in this area.

Are there other Kailh switches? 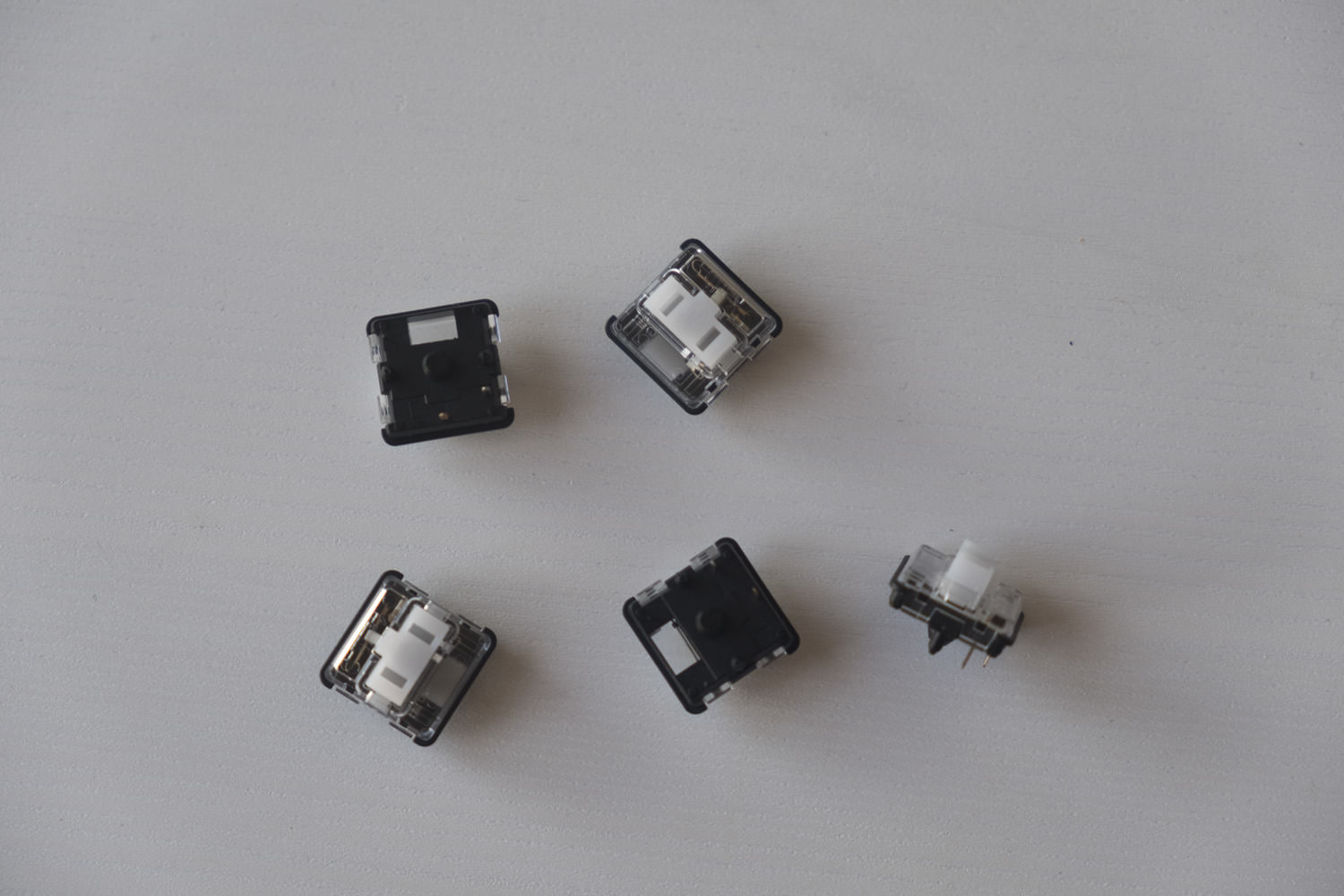 Yes, for sure. There are tons. For example, the switches above are clicky low-profile switches — an interesting combination that brings to mind the best laptop keyboards!

However, these three main groups are the most commonly available and/or interesting to talk about. If you’d like us to cover a different Kailh switch, let us know!

I hope you’ve found this guide useful! Let us know what you think in the comments below, and if you have any questions or spot any inaccuracies then please get in touch. Thanks for reading, and we’ll catch you on the next one!