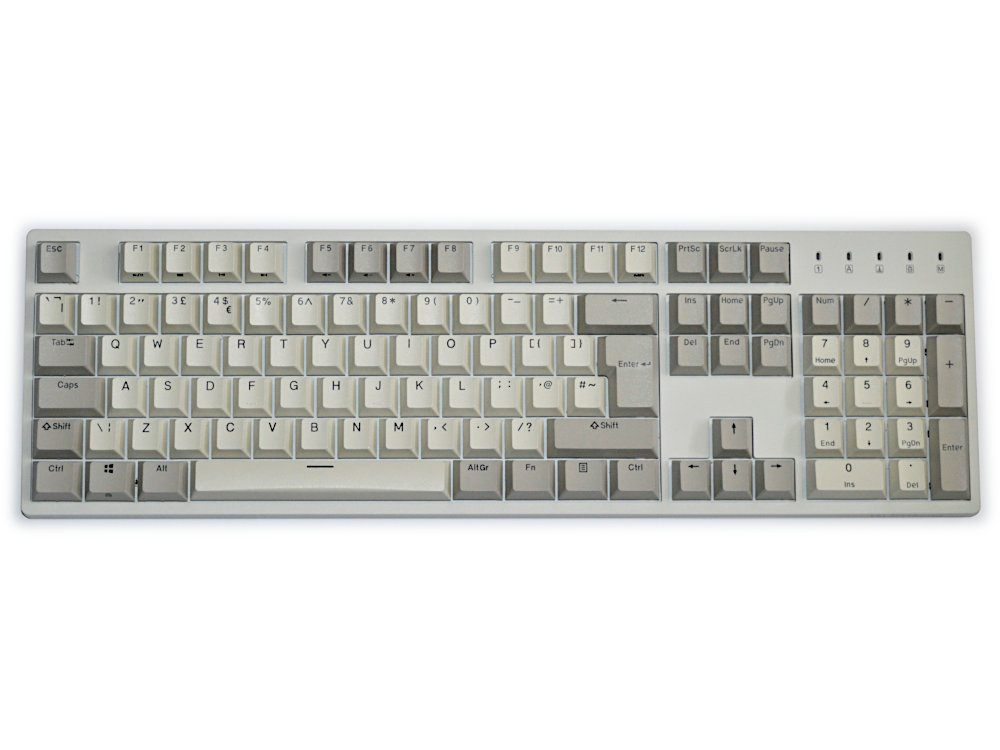 The Durgod 310 is a full size keyboard with Cherry MX switches, and it's fully programmable apart from the Fn key, via Durgod's Zeus Engine (DZE) software.

The keycaps are 2 different shades of double-shot PBT with black legends, a double shot keycap instead of having it's legend lasered or printed on to it, actually has the legend running through it like a stick of rock so it will never wear away.

Via the function key there are 7 media keys, and a customisable Win lock feature, the keyboard has a USB C port and come with 2 USB C cables, USB C to USB C and USB C to USB A (standard), also included is a velcro cable tie, a wire key puller and instructions.

Faith Cox  17/06/2021
I purchased this as my first mechanical keyboard, and Im not disappointed.

I needed a full key layout for work, so a custom was out of the question! I picked this after reading some reviews, and its a dream.

The MX Browns are slightly pingy, but thats the nature of the switch as they are tactile, not a fault of the keyboard.

The keyboard has a nice weight, lovely sound, and feels very well made. The keycaps themselves have a very soft, velvety feel and are great for the average typist.

Thanks Keyboard Co!!!
Strangely  19/04/2021
This is a well made piece of kit. It's weighty and just sits on the desk with no movement at all.
I have the light grey one with MX brown keys. It's the 1st time I've had a keyboard with mechanical switches since some old business ones back in the 1990s, so with the retro look I feel 25 years younger!!
The coloured keys are good for visual separation by block. The keys have a nice positive touch, maybe a tad too firm for me in retrospect, so we'll see as I've only had the thing a week. I've had RSI before from my previous programming work, but it's much reduced now.
The font on the keys is clear and legible. There are no weird dragon fonts or anything. You just look and there stuff is with zero points of distraction. I don't know how long the actual text will last, but since the keys are easy to replace it's not an issue at present.
The cabling is thick and feels robust. I particularly like the plug-in method of attachment for the USB3 which provides extra side support once it's in. It ensures the socket won't have side loads leading to circuit board breakage which I've experienced and had to fix on laptops.
The dust cover is a nice bonus, really nice actually.
I tried the Zeus software, which I downloaded from Keyboard Co. It immediately upgraded to v.1.0.2.2 so maybe Keyboard Co could ensure to have the latest version linked? To be honest, in my current capacity I can't see a reason to use it, though I checked and programmed a key combo (Alt+O) to fire up Microsoft Outlook, which works.
Reasons:
1. I got the keyboard as I only have access to a laptop currently and the keyboard keys are starting to fail. A UK spec replacement is almost the same cost as this DURGOD or a Cherry equivalent and on my laptop the keyboard plane is the very last thing to come out of the laptop, so I deemed it too much work and risk. When I get back to my big box I'll plug it in there.
2. I've just used cheap membrane keyboards before this because of their cost as I thought I might be a bit accident prone with coffee. However, I thought I'd try mechanical switches as the membrane ones I replaced annually because keys started failing and the coffee situation never actually arose!! The cheap ones have a lot of variability in key layouts which is annoying - I like the separate 'cash register' number section and the wide spaced arrows and home-end sections. It's what I'm used to, so I don't have to hunt....
3. I was actually after a Cherry keyboard, but first the fixed cable put me off and then, on closer inspection, the reversed key upper shift notations of Cherry put me off. I never knew about that until I saw photos. I just wanted a bog-standard layout with nice clear font. This supplies it all admirably.

All in all, a good keyboard. Worth it. Buy one. Just consider what strength keys you might need.