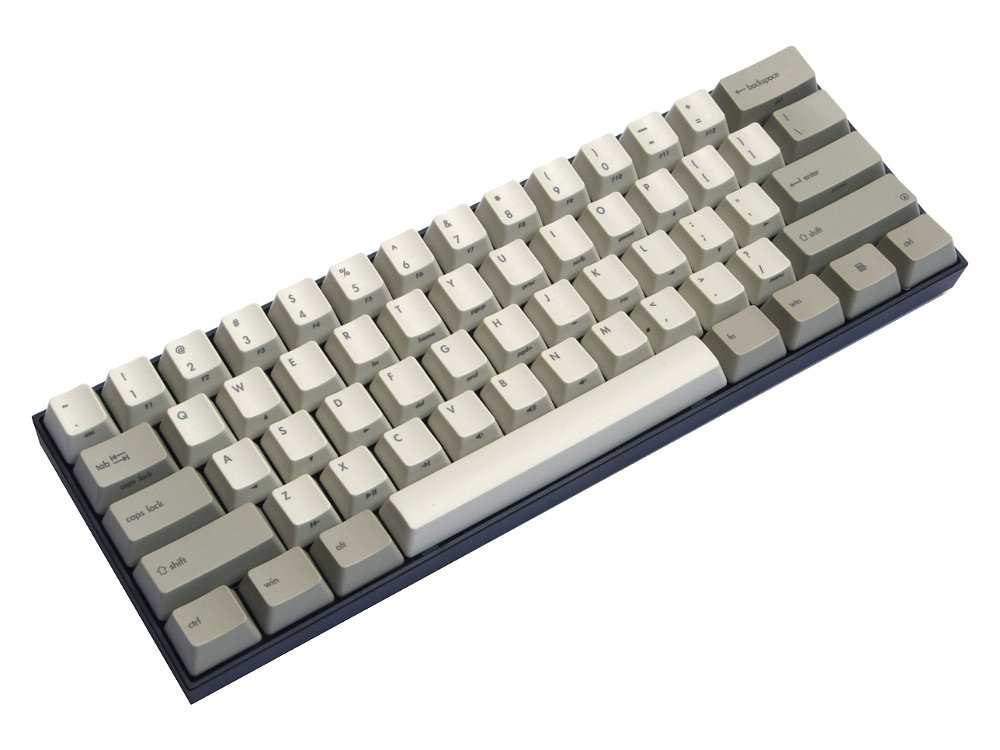 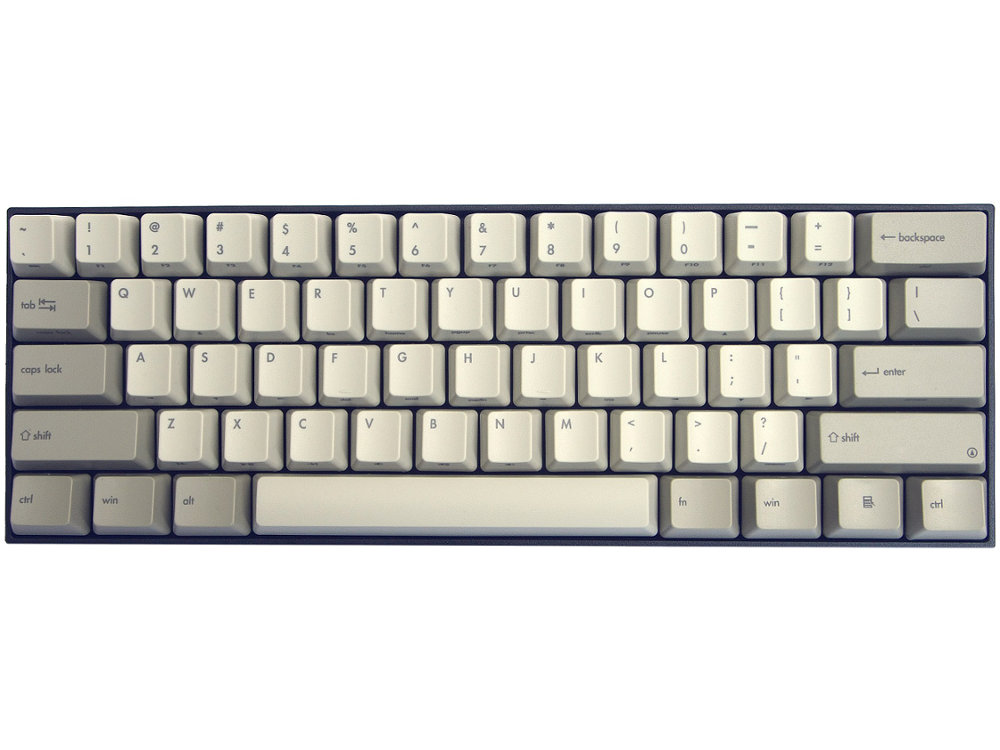 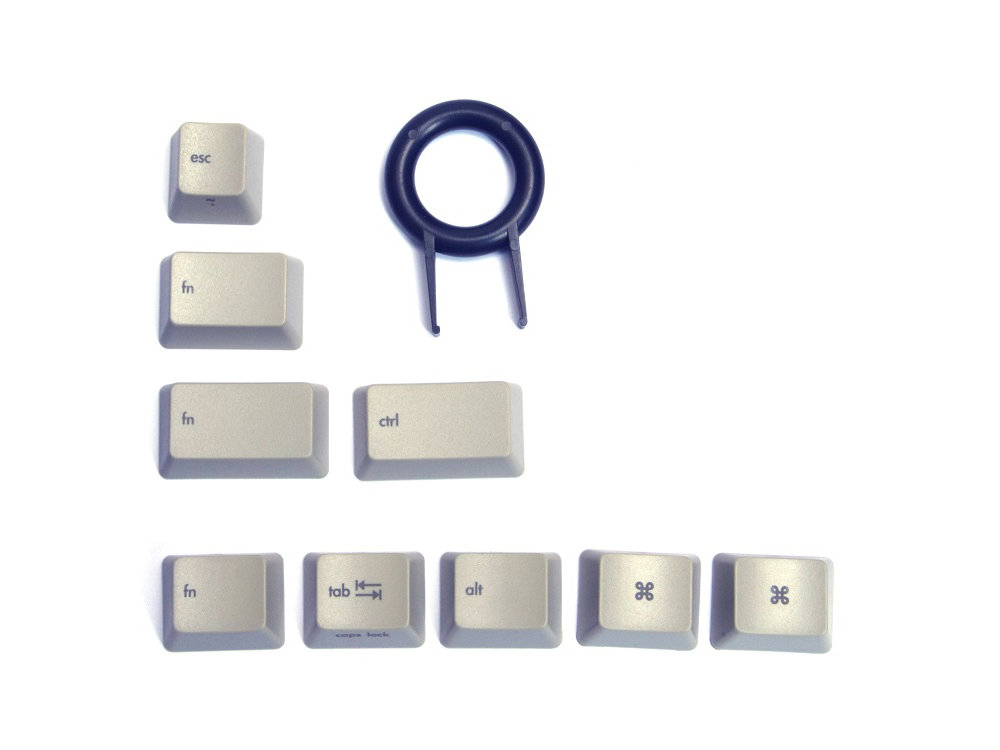 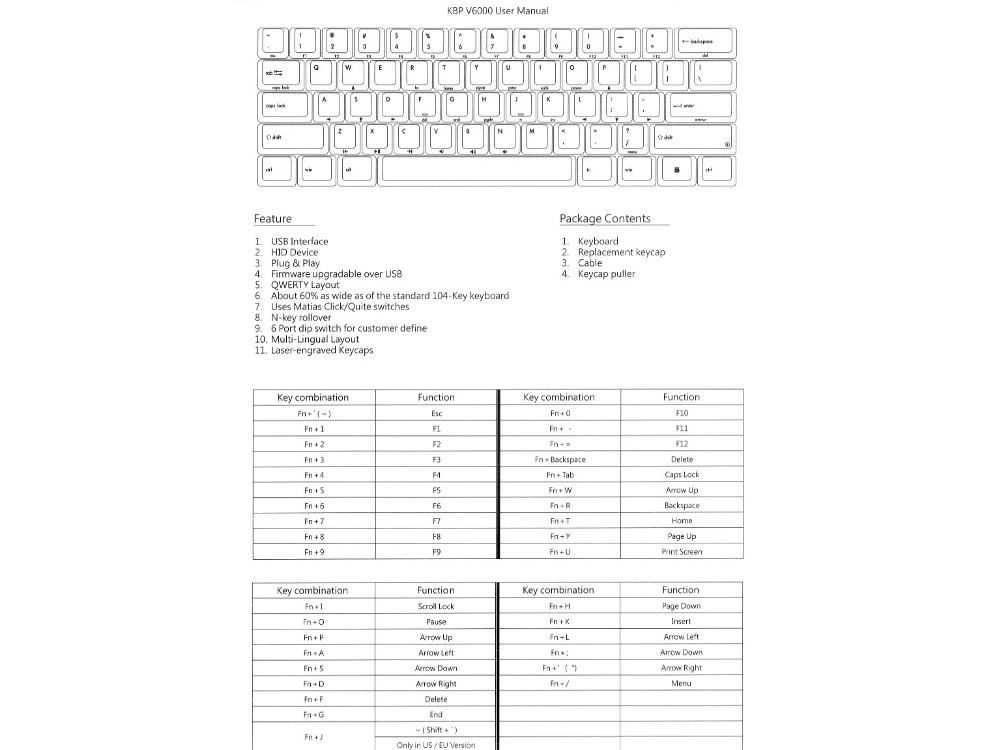 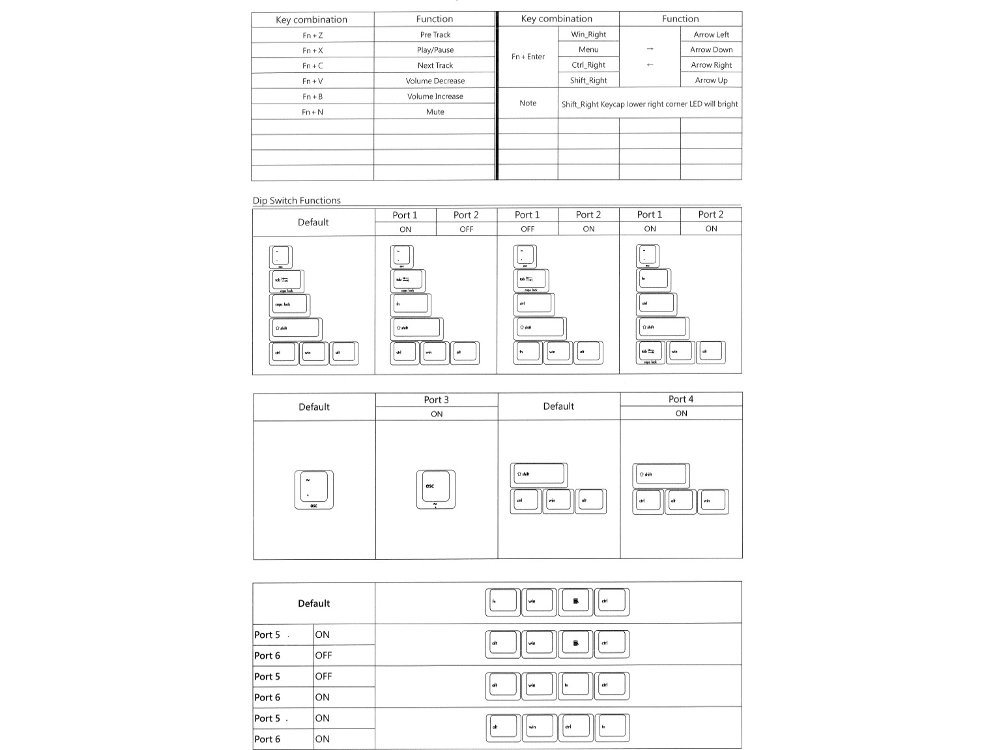 The KB Paradise V60 'Vintage' is a mini 60% keyboard, roughly 60% of the size of a standard keyboard with 60% of the keys, and vintage themed keycaps, light beige and dark beige.
The KBP-V60-MTS-Q-VINTAGE features dip-switches to customise your layout with additional key caps to match your preferred layout, a key puller to help swap your keycaps, and Matias Quiet Click switches.
The V60 also comes with a detachable cable, to help when transporting your keyboard.

The KB Paradise V60 'Vintage' is a mini 60% keyboard, roughly 60% of the size of a standard keyboard with 60% of the keys, and vintage themed keycaps, light beige and dark beige.
The KBP-V60-MTS-Q-VINTAGE features dip-switches to customise your layout with additional key caps to match your preferred layout, a key puller to help swap your keycaps, and Matias Quiet Click switches.
The V60 also comes with a detachable cable, to help when transporting your keyboard.

Anonymous  11/06/2020
I bought the keyboard with Matias Quiet Click last month and used almost a month.

I really love its compact layout. With the fn key, it is really easy to press arrow keys and especially ~ key can be input by fn+j. I am satisfying with the layout 100%.

However, I could not give more stars in this review because of the quality of the key switch. Maybe I am just an unlucky man. One of key switch is malfunctioning: when pressed a bit slowly, it inputs twice. Sometimes when it is pressed, it doesn't input at all. Good news is that it is the switch of the tab key, so it is less worse than any other normal keys are malfunctioning. That being said, it is annoying when I use it for alt+tab or ctrl+tab. To avoid that problem, I am pressing the key a bit stronger than usual. I am sorry for that this will be my last keyboard with Matias switch.
Moritz  25/01/2019
This is my favourite keyboard so far!

Bad things first:
- A 60% keyboard requires some time getting used to it. There are quite some keys that need to be accessed with a key combination. Especially the arrow keys and the delete key will take some time until you can use them as fast and comfortably as before.
- I got the model with the matias quiet switches. It is close to impossible to find other key caps for them. This will not be a problem with cherry switches.

Conclusion:
I was not sure about whether or not Im going to like the 60% layout, but now I know I love it. The matias quiet switches feel amazing and are as quiet as it gets. The only downside is that Im not going to get other key caps for them. I can fully recommend the keyboard if you want a 60%.

This is my first purchase at the keyboardco and I can highly recommend them. The support is nice and fast, so is the delivery of the keyboard.
Tidus   29/08/2016
First up: This is my first Keyboard with Matias Quiet Click Switches. I do own several high quality boards with Cherry switches though and I will try to compare both the switches and the board itself.


Things I didn't like first, so we got that out of the way:
The big stabilized keys rattle pretty hard. It's kind of annoying and I havn't had that issue with comparable Cherry-MX Boards like the Vortex Pok3r. It makes typing louder than necessary, wich is a shame, cause the switches itself are at least as silent as Cherry Browns with additional damping rings installed. However I was able to fix that with some lubing (try thick products) and now the big keys sound very pleasent.
I also noticed some very minor pinging, but I think most people wouldn't.

The keycaps sit very stiff on the switches. In fact so stiff, that I had to use quite a bit of force to remove them. And that is with a wired keypuller. My guess is, that you will have a very hard time trying to pull them of with the included plastic puller. There is also some danger to damage the switches. Keep that in mind if you can get your hands on some aftermarket keycaps.


Now the good stuff:
Switches (Matias Quiet Click) feel very pleasent. They are quite tactile with a tactile bump right at the beginning. After the bump the key falls into buttom-out with reduced force needed. For comparison: Cherry Switches get stiffer after their bump till buttom-out. The bump with Matias is much sharper and more pronounced than a Cherry Brown and may be comparable with Cherry Clear. They do feel much lighter however and your fingers don't fatique, cause you only need to overcome the initial bump and don't get much resistance after that. They also are smoother than Cherry switches. I can type with these as accurate and fast as with Cherry Blue, but without the annoying high pitched click. I consider them superior to Cherry tactile switches.
Buttom-Out is not as hard as with Cherrys without being mushy.


Neutral:
Keycaps aren't that bad. Many keycaps are, if you're not looking into after market. Texture is ok and lettering not really feelable. It's no GMK-Set though. Keep in mind that I can only describe my experience with the vintage set, as dark lettering on bright caps usually makes less problems than the other way round. I expect the legends not to fade away. With dark keys you most likely get a white infill for the legends, that gets dirty and feels scratchy.

The keys do wobble a little bit more to the sides than Cherrys. Doesn't bother me or affect my writing though.

The keyboard case is not the nicest thing in the world (it's plastic, over all) but it does its job. Doesn't crack or bend or squeake or anything. You can always install a after market case with decent materials if you wish. Nothing to complain really, wich is seldom with keyboards.


Over all I'm pretty happy with the board. Writing is pleasent and efficiant and there aren't many things that bother me. Lubing the stabilizers however is a must do!
Pricing is a little bit on the high side imo. You will get a Pok3r with same layout, Cherry switches, a metal case and superior PBT keycaps for not that much more money. If I had the choice, I would still pick the KBP v60 with Matias Quiet Click, cause the switch and therefore the writing experience is that much better.
Matsch  01/10/2019
Mechanical, compact, tactile but quiet. I just love those ALPS switches. My second favorite switch after the mighty buckling spring, of course. Normally I prefer loud and clicky, but recently I happen to be in an open-plan office unfortunately. This keyboard feels very satisfactory.
gordonm  15/09/2016
These are my impressions of the V60 keyboard after a few days of use. This is the also first time I've tried Matias Quick Click switches.

First the key switches. I've used Cherry MX Brown switches for some time and really like them but was keen to try something different which might prove quiet enough to use in a shared space. Well, first impressions, the Matias Quiet Click feel good and are pleasing to type on. The click is not obvious and they are certainly quiet compared to Cherry MX Brown - but obviously not completely silent. A different feel but just as satisfying.

The second big consideration was layout flexibility. I use a Filco Minila - also a 60% keyboard - in my every day work (programming) and have that laid out just the way I like. The V60 is also USAANSI layout which suits me fine. I use emacs and like Escape and Ctrl to be handy as they are frequently used in combination with other keys. On this keyboard (using easily accessible DIP switches and the spare keys) I swapped the Escape (positioned to the left of '1' as is typical for 60%s) so it's available without having to use 'Fn'. Ctrl can be positioned to the left of 'a', old-school UNIX style. Most other keys are positioned spot on and, unlike on the Minila, there are no compromises as to the size of any of the keys. The main layout drawback is, for me, the lack of dedicated arrow keys. These can be accessed in two locations but my preferred is to use Fn (positioned at the bottom left after relocating Crtl) in combination with WASD. It'll take a bit of getting used to. The other main drawback, having swapped Escape, is access to tilde '~' - often needed at the Linux command-line. I'm getting used to Fn-j and can also live with it.

Physically the keyboard is sturdier than I was expecting. Overall the keyboard appearance has a clean, functional vibe. The keys feel good but as has been mentioned elsewhere there is a slight 'ring' from the wide keys with stabilizers - especially backspace. I havn't tried to correct it as its not too obvious. The keys rock very slightly but that's part of their 'character' and not a drawback for me.

Overall, this is an enjoyable, fun keyboard with a throw-back retro look which feels natural and pleasing to type on and, for me, nicely compares favourably with the Filco Minila.