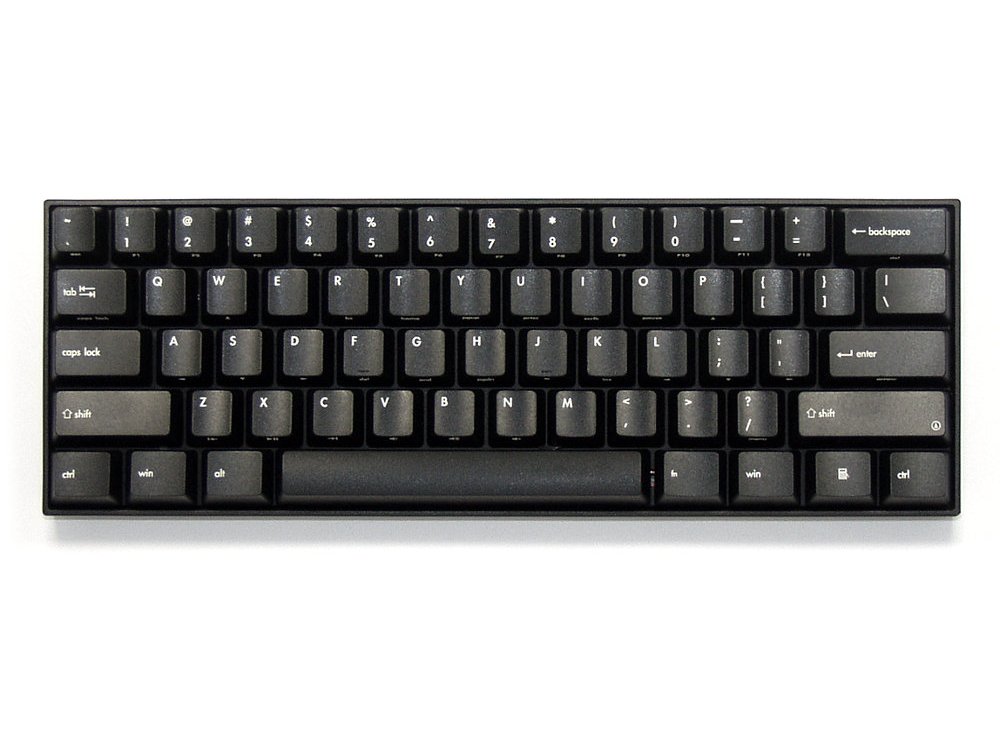 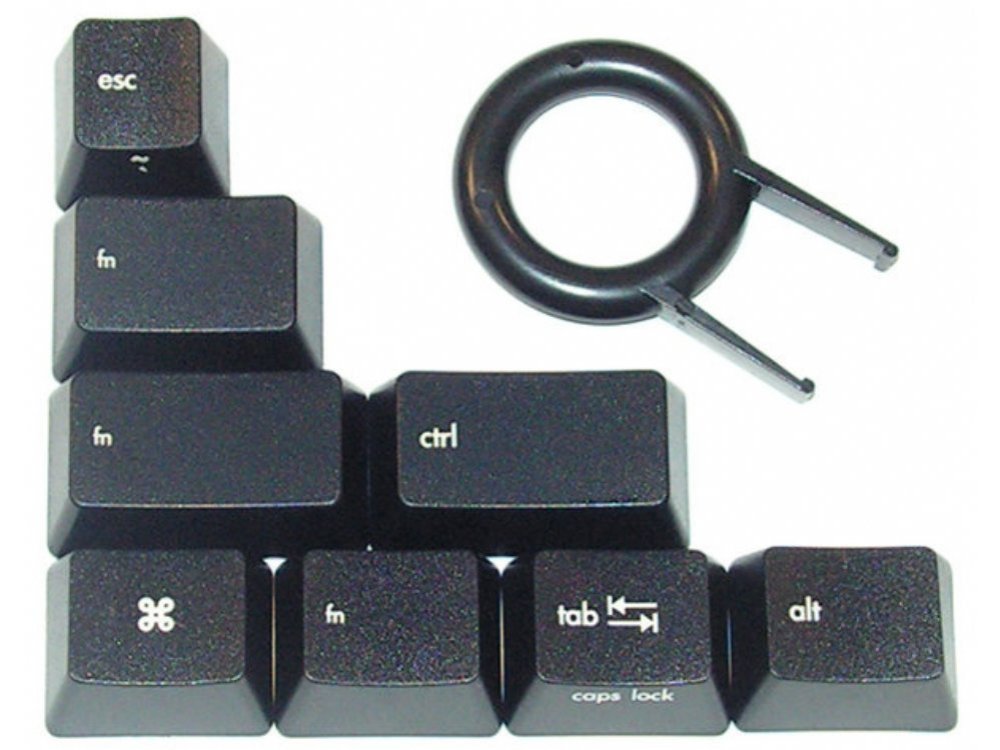 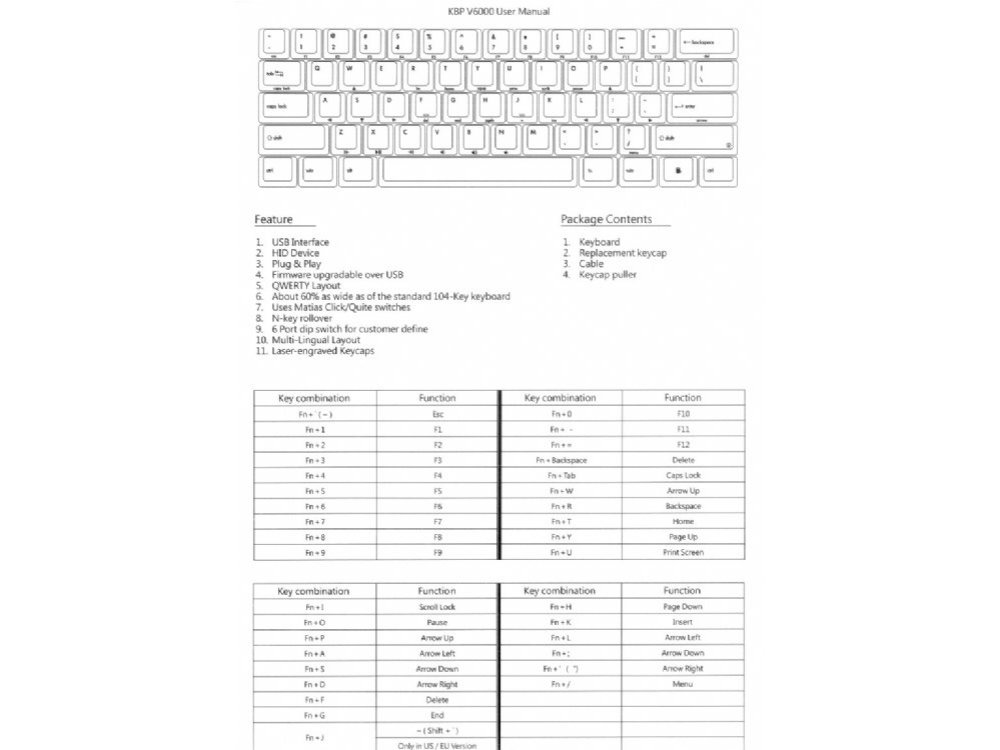 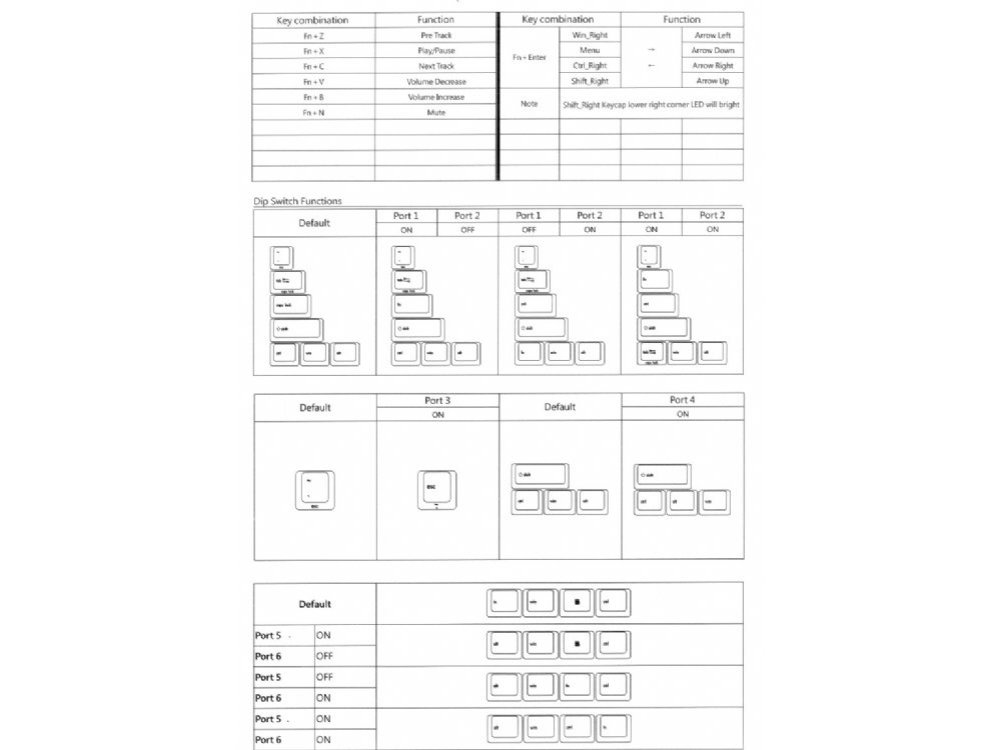 The KB Paradise V60 is a mini 60% keyboard, roughly 60% of the size of a standard keyboard with 60% of the keys.
The KBP-V60-MTS-C features dip-switches to customise your layout with additional key caps to match your preferred layout, a key puller to help swap your keycaps, and Matias Click switches.
The V60 also comes with a detachable cable, to help when transporting your keyboard.

The KB Paradise V60 is a mini 60% keyboard, roughly 60% of the size of a standard keyboard with 60% of the keys.
The KBP-V60-MTS-C features dip-switches to customise your layout with additional key caps to match your preferred layout, a key puller to help swap your keycaps, and Matias Click switches.
The V60 also comes with a detachable cable, to help when transporting your keyboard.

Alex  19/03/2020
Matias switches have been my favorite to write on for a while, and this keyboard is perfect for traveling and use with tablets as well as on my desk. It's compact, and the DIP switches are great at allowing you to configure the keyboard to your needs. The click switches just feel better to type on than the Quiet Click switches, in my experience, and if noise isn't a concern I wholeheartedly recommend them.

I give this five stars because there's nothing else like itno either good way to get a 60% keyboard with Matias switches. Keyboard Co is fast, reliable, and extremely professional. They processed my order immediately and dispatched it to arrive even earlier than I expected.

One note, not impacting my review, is that while the board does come with additional keycaps, these are attached extremely tightly, to the extent that I was concerned about damaging the switches themselves when attempting to remove them from the board using the included keypuller. In the end, because I have a supply of spare switches (note that their failure rate is somewhat notorious, so you might also encounter this) I simply desoldered and replaced the existing switches with new ones.

In the week since owning this, I've used it for work extensively and, in the evenings, written about 10,000 words of a new novel. It's a pleasure to type on and a wonderful piece of equipment, well worth the price if you're in the market for a small keyboard with a completely unique typing feel.
Tom  20/11/2017
After using this keyboard after several weeks I can pretty much say that I am very happy with it. If you are looking at this keyboard and wondering whether you should buy it, here are some things for your consideration.

Switches. This keyboard is one of the few 60% keyboards that run with Matias switches. You could probably get a Planck or similar custom keyboard and go that route, but from my initial research it means much more investment. If you are keen on following that route, I recommend doing some research: checking out youtube, Asian websites (that sell boards and switches) and observing Massdrop to get an idea what people are doing. You can also find Matias full size keyboards (much more on the market than 60% at least here in Europe) but then if you are keen on a TenKeyLess or full size, or wondering about whether 60% is good for you than I guess my review will not be of much help to you.
I have been led to Matias Clicky switches by doing some research (and spending some cash too unfortunately). I was a bit unhappy with the board I had so far, both due to size and the switches it had (Cherry MX browns). A Matias clicky switch is much more exciting to me than any Cherry MX (haven't tried many of them though) I have tried so far: I have tried Cherry MX clears (scratchy and tiring for the hand), browns (scratchy, not enough tactility), blues (scratchy, tactility a bit weird), etc. I think Matias comes close to the MX clear in terms of initial key resistance, but then MX clears get very resistant throughout the whole of the key travel which is tiring. Blues have a similar bump so to speak (when you compare the tactile bump to the release resistance) but tend to be less resistant overall. It is hard to describe this. Matias is not like that. I mean it is like the keyboards of old - stronger tactile bump in the beginning and a nice release. Typing on it is real fun. There is one caveat with this switch: you will find it difficult to replace the keycaps: not many vendors except perhaps KBParadise and Tai Hao, they are uncommon and pricey (customs, etc). Do note, that getting even less common keycaps (like Dvorak) might be impossible with this one: you can get KBParadise blanks if you search well but then you might lose some of the Fn shortcuts fine prints that usually tell you what to do.
In all, switches are a great aspect of this keyboard, I would say one of the major two. It was a very good move by KBParadise to release this keyboard with this switch. It is so much better for typing than anything else I tried so far (above Cherries, Gateron and Outemu).
Do note, that the switch is clicky and loud enough to probably make your colleagues at work frown. I use this keyboard at home, and it can be heard from the other room when someone is typing on it. I can't compare it to Matias Silent Click as I haven't tried it. However, judging by what I've seen - the build is very similar except that the Silent Click have inbuilt dampeners. Whether that is enough for an office, I can't say.

Layout. Since this is a 60% layout, and you are reading this, you will most likely know what to expect. If not, then I am not sure if this review can be of much help to you. I think this isn't a layout suitable for gaming (I think, but I don't game these days), but it is great if you touch-type: majority of the keys are under your fingers, and if you touch type you will get to adopt the key shortcuts suggested by this keyboard without many issues. I will point out an overlooked but highly pleasant aspect: the '~' key lying just under your right home index finger, and the Backspace and Delete buttons lying under your left home index finger. In both cases you need to use the Fn button to trigger these, but if you switch the Caps Lock into Fn (I never use Caps Lock anyway -- at least perhaps in anger) you get an ideal typing environment as you can correct yourself much quicker than on other layouts I've seen. And you can jump to your home directory (Unix) real quick. Another useful shortcut is to remap the top left '~' into Esc -- very useful if you are a Vim typist. Personally I do not think you can beat that, if you look at that niche. Otherwise, this layout is much like any other 60% layout out there, so if you are comfortable with that (or not) then that is what you need to consider if you think whether to buy this one.

Final note: giving this 4 stars due to keycaps: while the ones stocked in the keyboard are sturdy and fine, you will find it hard to replace them with something different if you are keen to do so.