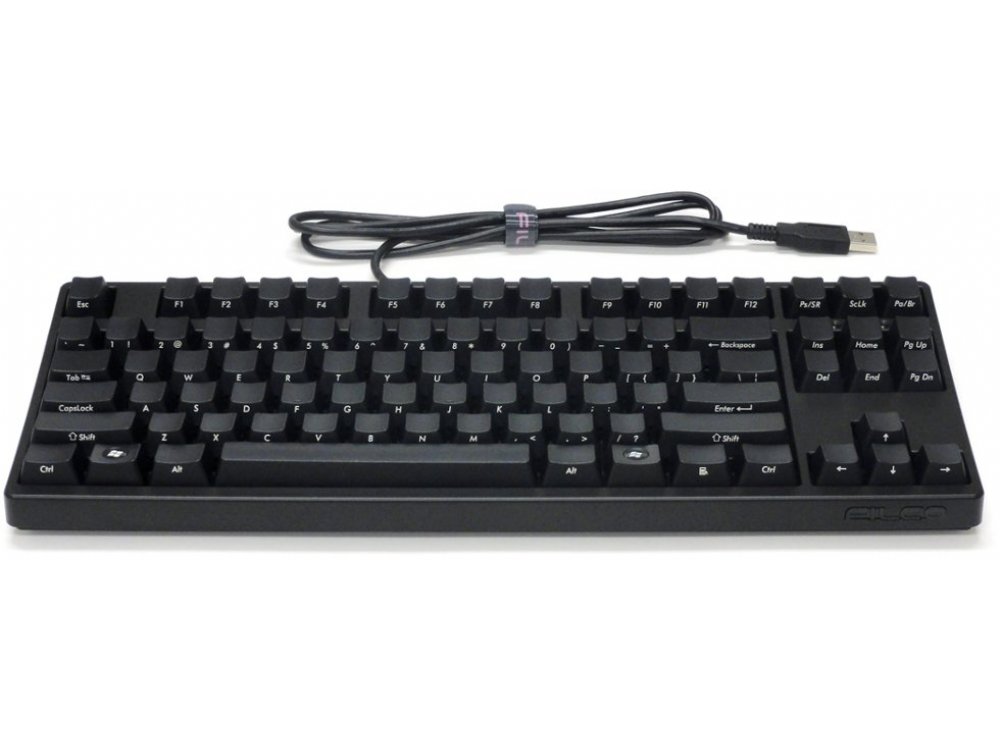 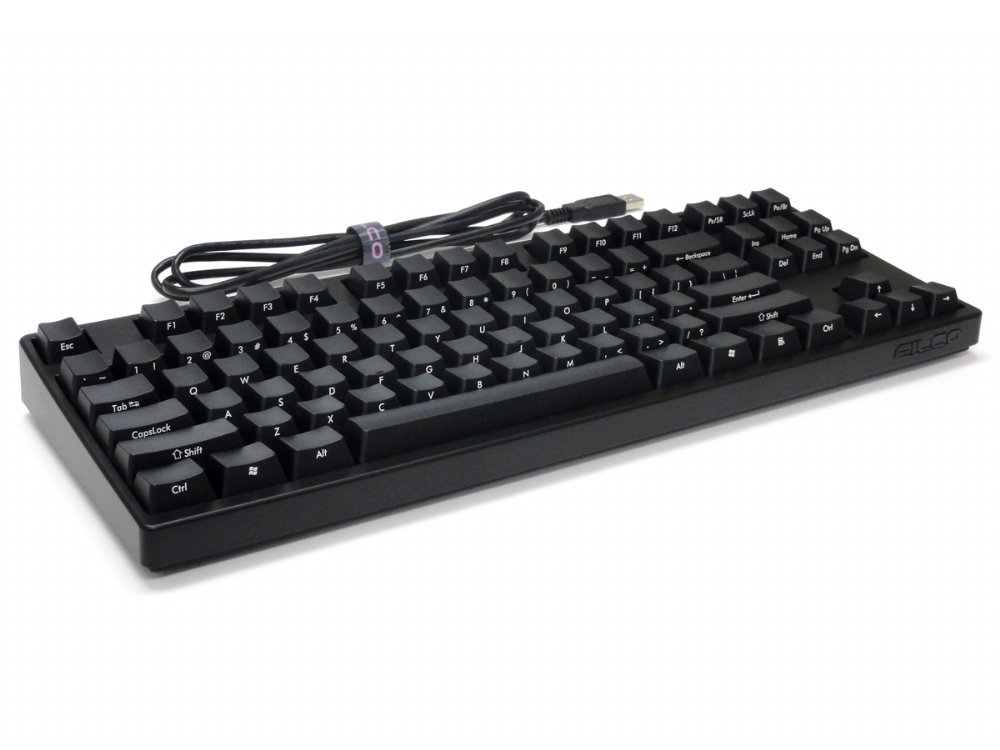 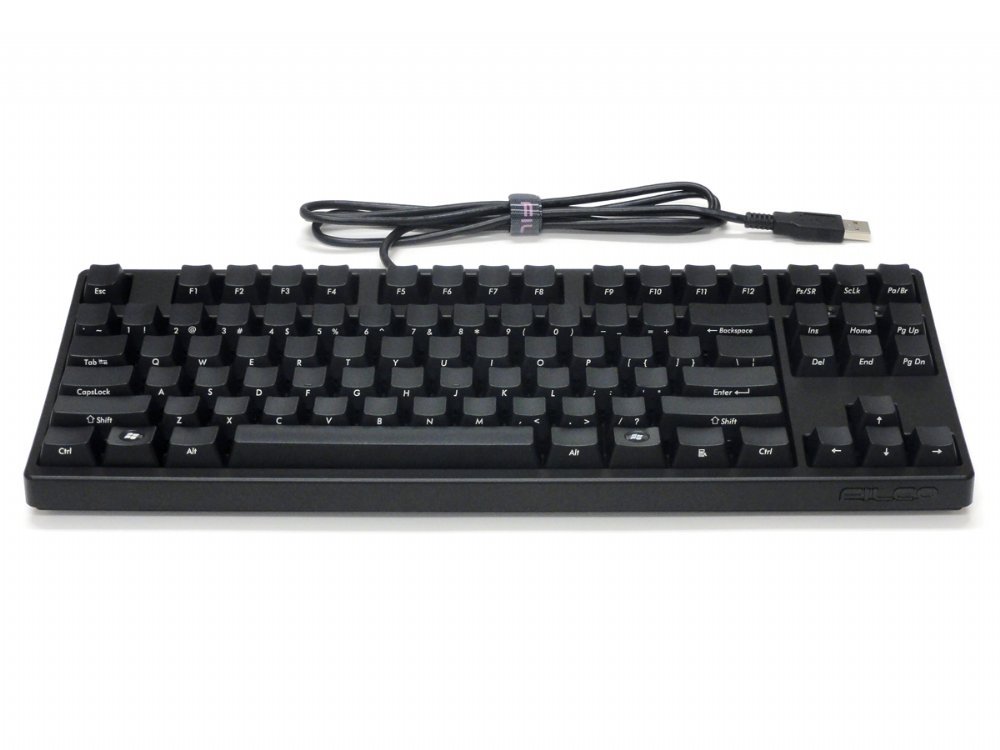 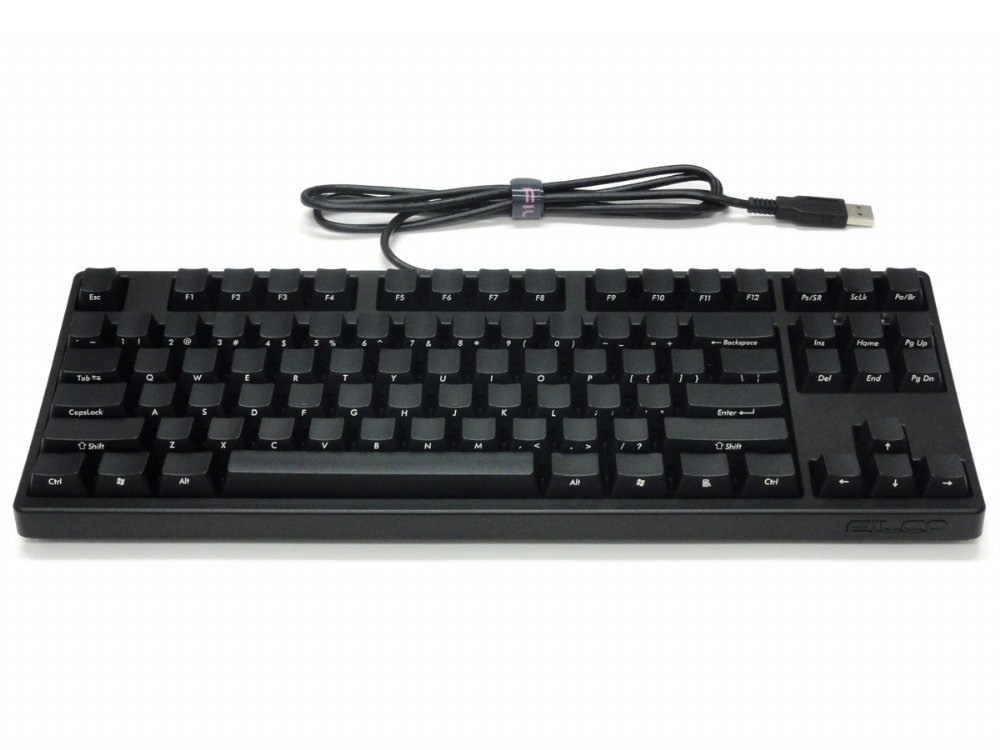 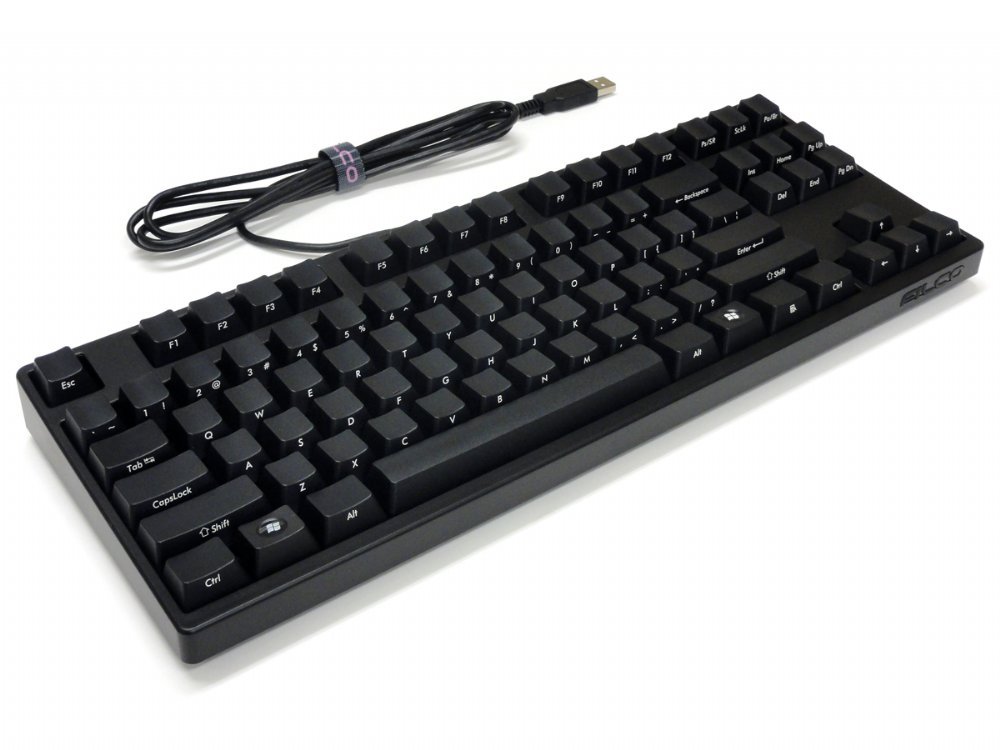 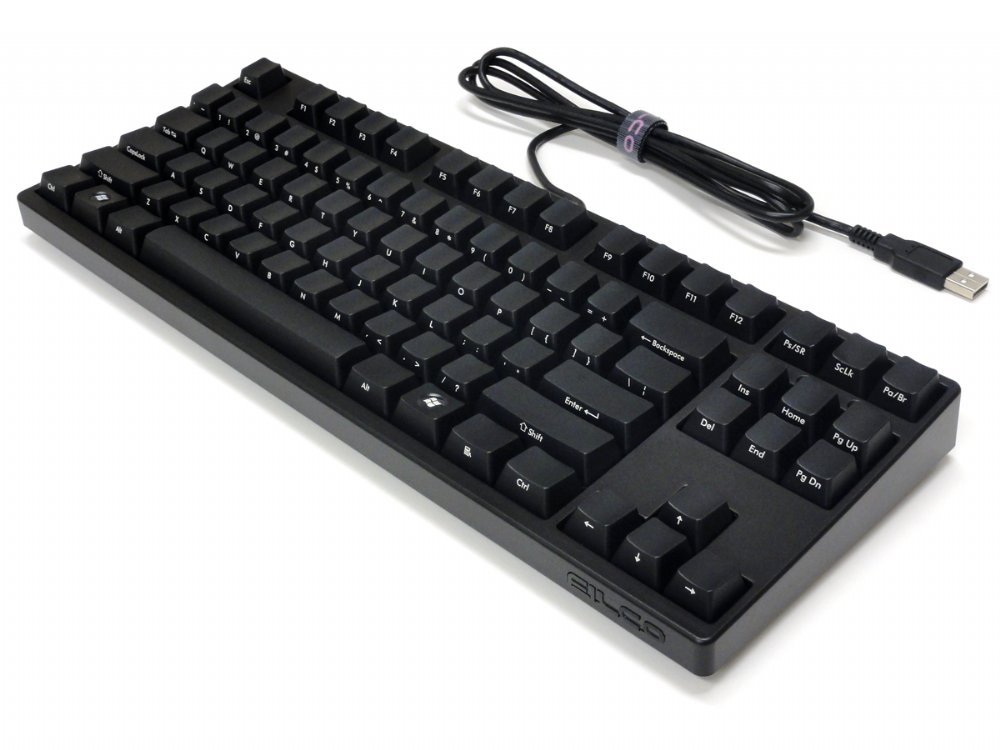 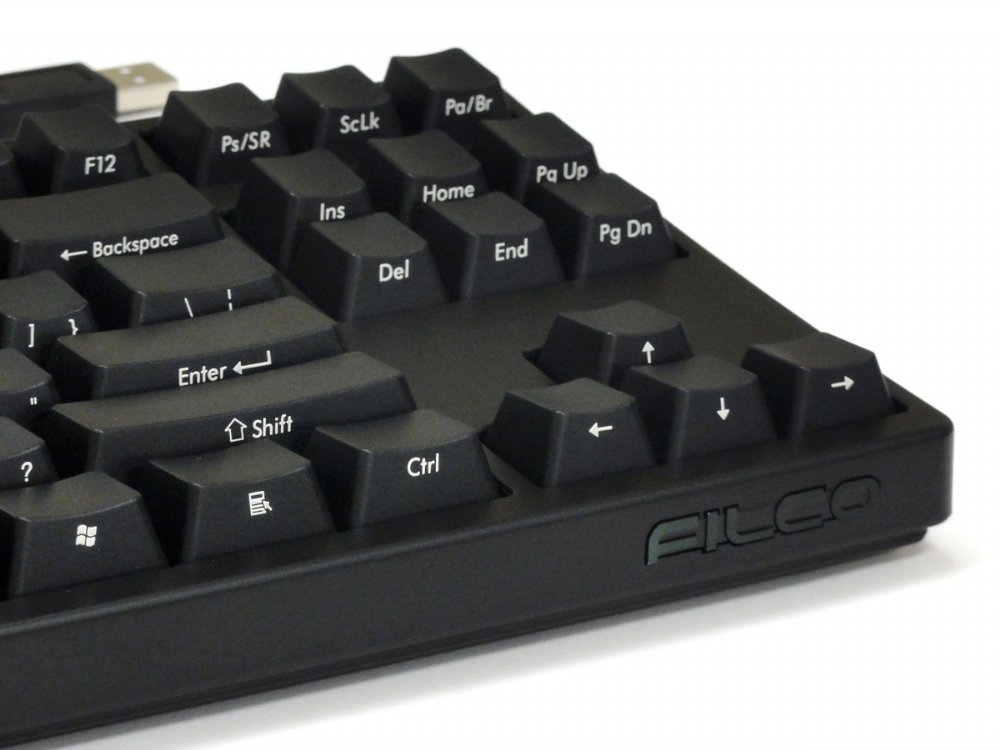 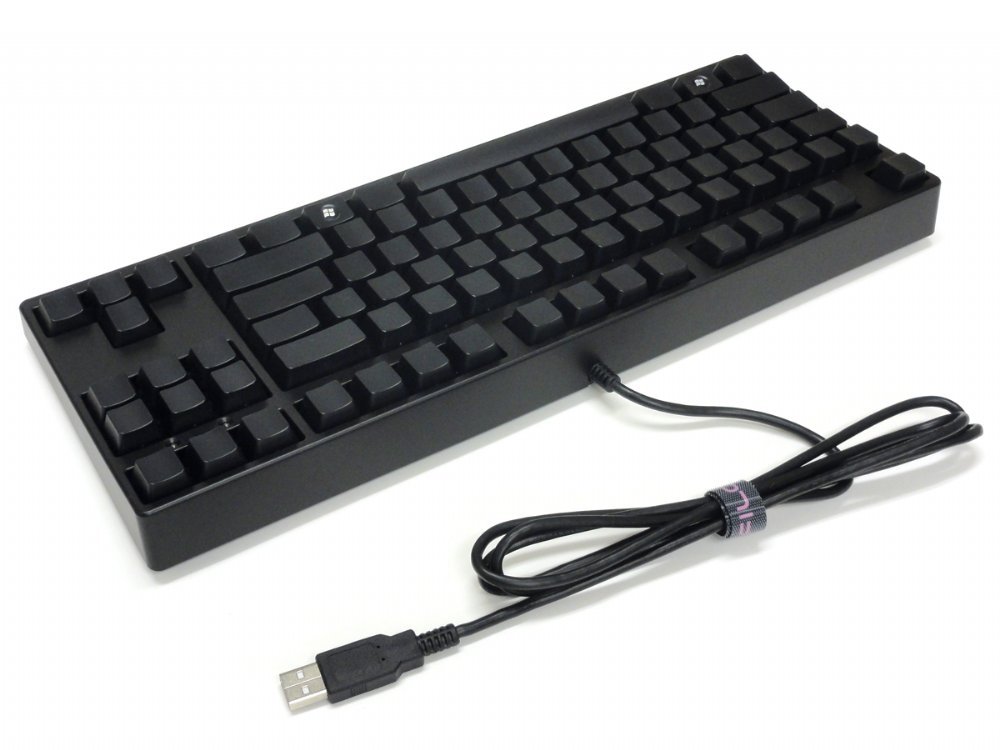 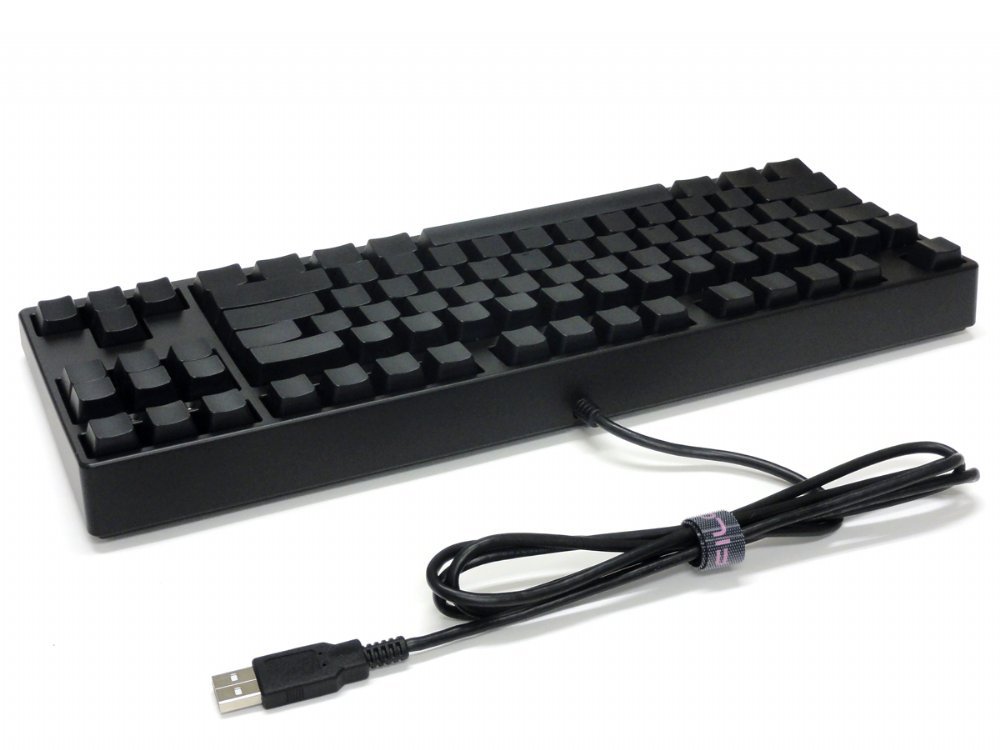 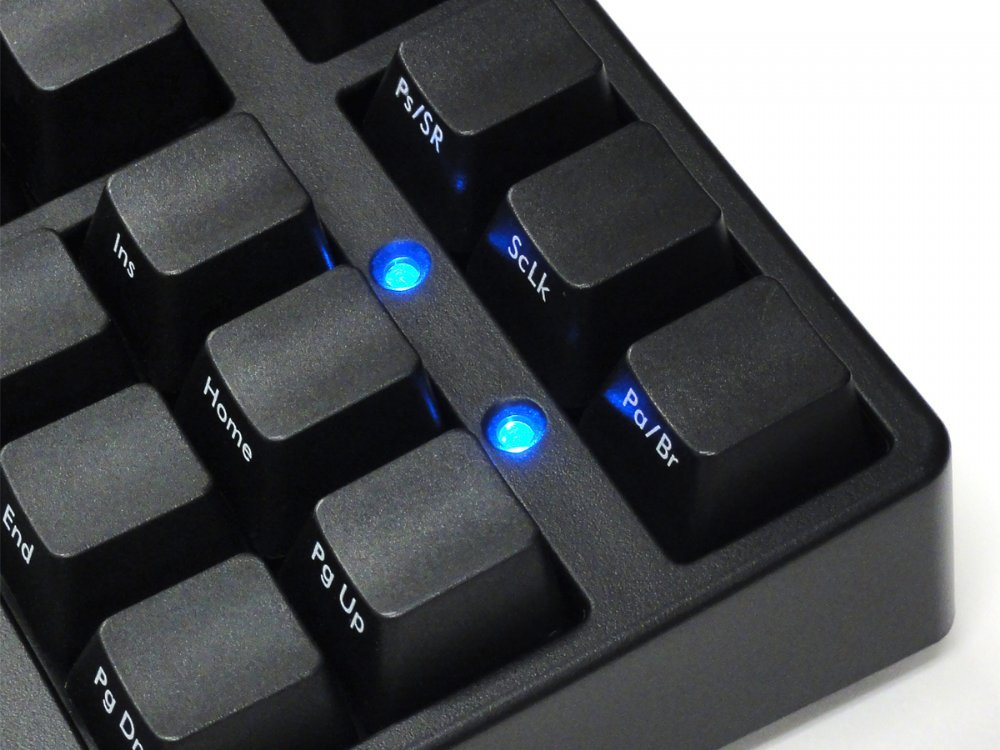 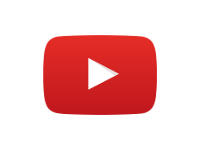 Additional Accessories
The Ninja comes with 2 sets of Windows keys 1 set top printed, 1 set front printed, and a key puller to help you change the keys.

Anonymous  09/12/2021
Really love it. comfortable with simplicity design. I enjoy every minutes clicking on it.
Anonymous  16/02/2021
Downright the best mechanical keyboard I've owned so far.

As someone coming from another Cherry MX Brown board, I was impressed by how nice this Filco feels to type on. Rock solid feel, no vibration or movement while typing at all, even with the feet extended. It does not feature frills like RGB or rows of programmable keys, which can be a con for some but I adore the simple aesthetic. The tilted print on the keycaps is unusual but works well in practice. Filco also offers the regular (non-ninja) Majestouch-2 with normal top printed ones if you prefer those.

To sum it up: simply a very well built keyboard. The only downsides I can think of is the lack of frills (depending on your preferences), the non-detachable cable and well, the price tag..... But it's worth it.
Anonymous  04/04/2020
Trs bon clavier. Fidle la description et compact. Agrable l'utilisation.
Livraison rapide.
Anonymous  24/09/2019
Excellent keyboard, don't think I'll ever have another one :)
Anonymous  17/05/2019
It's been close to a year since I bought this magnificent keyboard, which I love.
Best keyboard I've ever had. Extremely comfortable, extremely good-looking, feels and looks solid and heavy so it never moves around. The chord is long and thick, and definitely not shoddy. The angle the keyboard makes with the table when the feet are extended is pretty much perfect.

I have still a few negative remarks to make. The top layer of the space bar key has started getting scratched away over a not-that-small oval-shaped area near where I'm hitting it the most often. It's not glaring but it is a noticeable blemish. Also one of the two little rubber stabilizers on the tips of the feet of the keyboard used to prop it, has fallen off pretty quickly and doesn't stick to it anymore. But, I kept using the board with just the one remaining rubber stabilizer and I can't tell the difference (especially, it didn't make it wobbly at all) so I don't mind at all.

As for the sound of it (I bought the one with MX brown switches), it's not loud by any margin, but to say it's a silent keyboard would be lying. I doubt it would ever bother people at all in an office environment, but it's definitely noticeable if you're the only one using a computer in a room of average size (provided it's not a nightclub, ha). In short, it just sounds like an average, non-intrusive keyboard, but it's not miraculously soundless or dampened.

I bought red O-rings for it at the same time I ordered the keyboard. To be honest, when they're on, the difference is there, definitely, but from a certain perspective it makes no practical difference. So little in fact that I initially only put o-rings over about half of my keyboard, to test their effect... and in the end never got around to put the little dampeners over the remaining keys, because I'm lazy and I can't actually tell much of a difference between the sounds on the left side and on the right side, unless I *really*, purposely focus on trying to hear it.

So, it does make things better, unquestionably (and to me the tactile experience is identical, so no problems on that front), but it might very well be like barely ten percent less noise, and not much less. Therefore, no drawbacks for using o-rings at all, just don't expect it to be that much better with them than without.

As for the Keyboard Company : perfect delivery, nothing to complain about, would recommend it to anyone. It's so very nice to go shopping online on good websites like this one, that aren't creepy, scam-ish, or maze-like at all (you-know-which-one).
Csolje  12/12/2020
Best keyboard that I have ever used
Anonymous  26/10/2020
So far one of the best keyboards I've ever used
G S  20/08/2020
Solid, quiet, smooth. Excellent upgrade from the cheapo clacky mechanical (Outemo brown) I started with. I put blue o-rings on the keys that get repetitive hits (backspace, delete, left arrow, space). All is good.

Would really like to be able to buy *individual* blank or printed keycaps in different colors, Filco OEM if possible, on this site. The only current source I can find is in the US, £14 to ship a £1 keycap.
T.J.  18/08/2020
Great Product!
Anonymous  04/03/2020
Excellent keyboard. Delivery (to the Netherlands) was extremely fast and everything happened without any issues. Could not be more pleased!
Anonymous  13/03/2019
Great product, fast delivery (Germany). Not too loud during the day, can be a little bit loud though if you decide to use it in the same room where somebody sleeps.
GooseTea  06/03/2019
VERY fast delivery from UK to Germany. I ordered it one day and the next day the TNT delivered it.
The keyboard is so perfect that 2 of my colleagues started researching about mechanical keyboards. The rest of them (who already own one -- but not FILCO -- or know what a mechanical keyboard means for a developer) well, they envy me.
What I like the most is that the keyboard is quite silent when I type in a regular calm way. But it can be very loud when I am angry and I don't want anybody around me and I hit it very hard. It's like a signal: go away, I'm working!.
If I recomand it? Nope, sorry! Let me be the only one who types on such a beauty.
marko  03/07/2018
Ordered on a Tuesday, delivery to Croatia came the next day, made me really happy. Keyboard feels sturdy, the forward printed caps are cool, and my fingertips no longer hurt when typing a lot (for me, brown switches feel a bit better than blue that I've used for a long time). Takes a bit of getting used to after using a full keyboard for a long time, but other than that, great stuff.
Thanks!
Anonymous  05/02/2018
Great keyboard. Not too noisy with brown switches but without compromising the great feeling.

Couldn't be more pleased with my new keyboard.

Oh, and delivery was good too.
kuromaru  13/12/2017
Last time I was using mechanical keyboard I was still searching Google through AltaVista. Since then, I have been reluctant to return to mechanical because of noise, but recently I had a chance to try keyboard with Cherry MX Brown switches and after that I needed to own one too. This keyboard is outstanding, the build is sturdy and can help you in case of zombie outbreak as a blunt weapon. The tenkeyless size is excellent for shortening the distance between typing your status and navigating mouse to next youtube video. The noise is greatly reduced with mousekeyboradyoga pad under it (fits perfectly on a larger mouse pads). If you're looking for better typing experience, I can definitely recommend this fine keyboard.
fcat  24/10/2018
Best keyboard I have ever had. Definitely worths to every penny.
Alan  20/09/2018
Bought the MX Brown US variant and I have to say this is the BEST keyboard I've ever used in my life.
Used it since 2016 and still works like the day it was delivered.
I like it so much that I carry it with me from work to home and back.
Tried using o-rings to muffle some of the sound but ruined the great feeling when pressing the keys so I just got used to it (it's not very loud').
Anonymous  13/08/2018
Excellent keyboard - perfect size - excellent built quality.
The delivery and customer support were great - the keyboard arrived quickly.
J.Huisman  31/07/2018
Amazing keyboard! Did a lot of research prior to ordering this keyboard. This one seemed like the best choice and best quality. I couldn't be happier with this keyboard. The build quality is fantastic. Very solid and heavy. Typing is really smooth and pleasant.

Delivery was really quick, one day, to the Netherlands with TNT Express.
Anonymous  23/02/2018
Superb keyboard! can't really recommend it highly enough! Works like a charm with macOS as well, as long as you do a quick remapping of option and cmd keys.

Excellent service and quick delivery from KeyboardCo as well. Highly recommend them.
Anonymous  09/01/2018
Exactly as advertised. I am really pleased by this keyboard's form factor. From order to delivery everything was presented plainly with no confusion.

Thanks.
Anonymous  17/10/2017
Perfect !
Fast delivery to France. Everything I expected from a mechanical keyboard.

The MX Browns in my board are definitely the new retooled switches from Cherry, bonus pts for that, keyboardco!
Anonymous  10/04/2017
Great mechanical keyboard which should work for me for decades. It has brown MX switches. Well made, solid-looking keyboard.

Fast shipping and well packaged. Thanks!
Anonymous  23/09/2016
Excellent keyboard. Delivery went smooth as well, highly recommended!
Anonymous  14/09/2016
Excelent Keyboard! Couldn't be more pleased with it.
I got the brown switches, nothing new there, but the feel, the layout and the caps all toghether make this a killer combo!

Packaging nothing special, the bare minimums, also fine by me, no need for rediculously expensive packaging anyways.

Thx KC!
Anonymous  05/07/2016
Thanks, the delivery has been really fast and the keyboard is perfect.
Anonymous  05/11/2015
Thanks you Robert. It's fantastic!
slecot  23/12/2016
I'm already owned a filco keyboard and i wanted to buy a similar one for my job. I'm not disappointed by this ninja tenkeyless version, the size is perfect , the feeling with the keys is incredible. i'm recommend this product . i'm reduce as well the pain i had to my fingers .
Anonymous  01/08/2016
Great keyboard, arrived in excellent condition, packaging was minimal but sufficient for safe delivery.
Giuseppe  10/07/2016
I like the feeling with the keys and I love this keyboard. I comes from filco majestuch but this keyboard give a bit more feeling while typing. Only problem no hardware switch to change layout like change casplock in control or disable wincmd button
Anonymous  05/11/2015
Thanks, everything was perfect and the keyboard is fantastic!