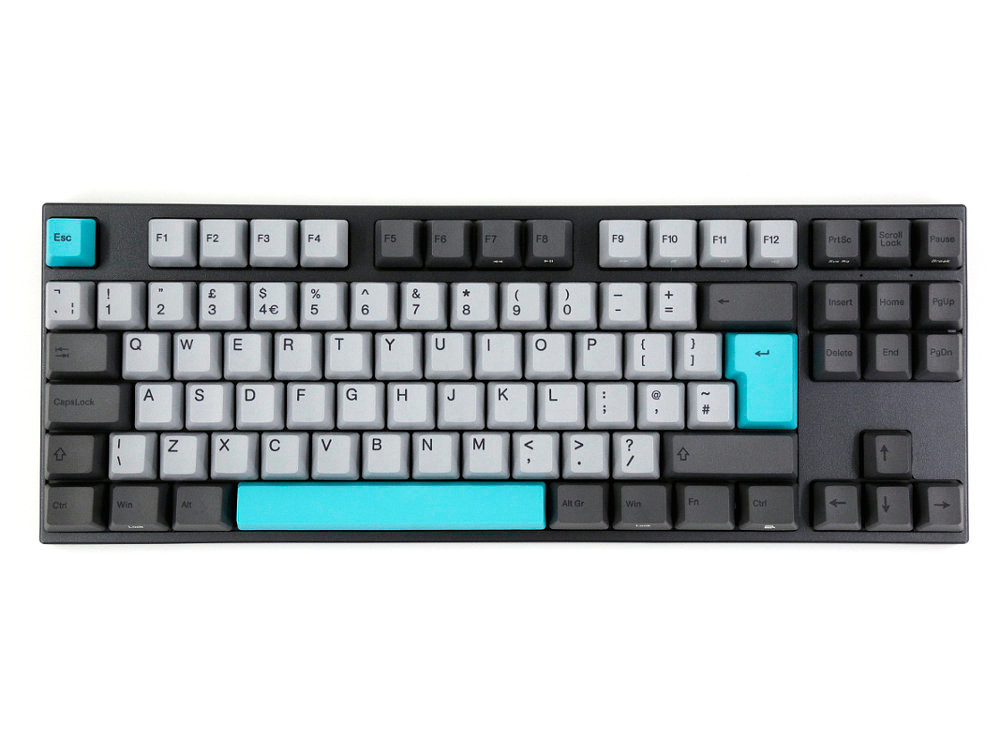 The VA88M V2 Moonlight is a high quality, tenkeyless, mechanical, PC keyboard by Varmilo it has a charcoal case, black Iron base plate, white backlighting and the keys are dark and light grey with three cyan keys. The legends are black and dye-sublimated onto the PBT keycaps in a UK ISO layout.

The keyboard comes with a detachable USB-C to USB-A cable for use with it's USB-C host port.

Chris  02/06/2022
I've used a few MX Brown-based keyboards over the past 15 years or so. In spite of using the same type of switches, they have all had a different feel due to differences in switch mounting, keycap materialthickness, and case weight.

This VA88M is my favourite so far.

Pros:
- Thick PBT keycaps with dye-sublimated legends. I would be happy with any of either dye-sub, double-shot or laser etched for longevity but the sharpness of dye-sub is great. I believe PBT to be the best material for keycaps - I have a Cherry G80-3000 which was used over 40 hours or week for over 10 years, and only has a slight amount of shining on the space bar. ABS keycaps by comparison start to turn shiny within months.
- Very heavy, which gives a feeling of quality, but also ensures it doesn't slide around as easily.
- Zero rattle to the larger keys (e.g. spacebar, return key) due to the stabiliser design. I haven't had any issues with Cherry G80 stabilisers from a functionalityperformance perspective, but they're so noisy. This VA88M by comparison has a space bar very similar to the regular keys (this took a couple of days of getting used to).
- Very minimal borders and wasted space on the case, but without feeling cramped.
- The 3 cyan-coloured keys give a bit of flair without being over the top.
- USB-C port on the keyboard, meaning easy replacement if the cable gets damaged.
- No weird key ordering issues, which I was experiencing with my previous Mistel ergosplit keyboard when typing between leftright halves quickly.

Cons:
- Shame that the caps lock and scroll lock keys don't have an indicator LED built into the key. Instead, there is a tiny LED above the Home key, which is quite difficult to see when seated. I think the non V2 version of the VA88M (with Micro-USB instead of USB-C) has them, so I don't know why they changed.
- The LED backlighting is kind of useless. I don't use it anyway, but with the dark and thick keycaps, it seems more for show than something you could make use of in a dark room. And if it's for show, it's a shame it's just white rather than RGB. On a plus side, I don't see any perceivable flicker, not even out the corner of my eye, which can be an issue with some LEDs.

As for Keyboard Co, it's been a few years since I last bought anything from them, but nothing has changed - still the same informative and easy to search website, still good pricing, still good order updates, and still prompt shipping with good packaging.