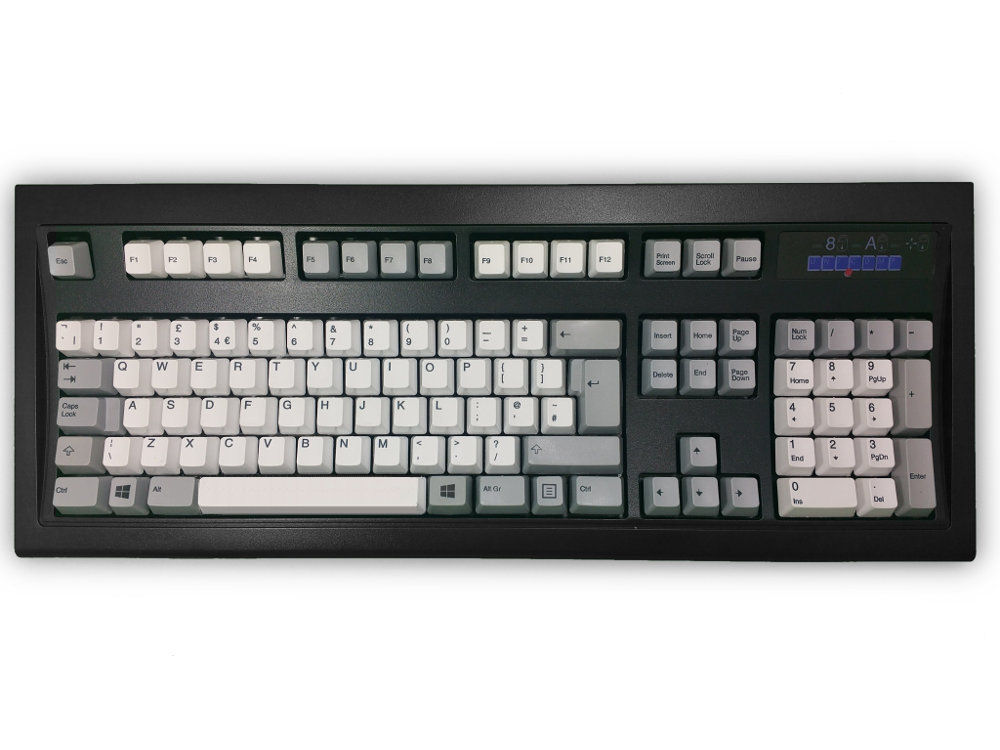 The New Model M buckling spring keyboard has the same mechanism, feel and similar layout as the original IBM Model M keyboard, but with a slightly smaller footprint.
With the much-loved buckling spring key design these keyboards have been prized by computer enthusiasts and robust typists because of the tactile and auditory feedback of each keystroke.

Manufactured in Lexington, Kentucky, this buckling spring keyboard is a heavy, audible click keyboard with a solid feel reminiscent of the classic IBM Model M keyboard.

Buckling Springs
Buckling springs originated in IBM's mechanical keyboard as a fundamentally different kind of switch mechanism. Featuring a coil spring that sits between the keycap and a pivoting hammer that collapses when pressed, the spring provides a loud click and tactile feedback.

Model M-Inspired Keycaps
The two-tone white and gray buckling spring keycaps are made of PBT polymer. The dye-sublimated legends compliment the authentic feel and classic design.

Charlie  27/03/2021
As a long-time user of a Filco Majestouch 2 (MX Reds) bought from Keyboard Co something over 7 years ago, this keyboard was quite the step change.

My first buckling-spring unit, cannot compare it to an original IBM version as I haven't experienced it.

What I can say about this board, is that it is just bliss to type on. Much more of a satisfying sound than the shrill, sharp click of the MX Blue switches and their clones (especially some of the cheaper ones like Outemu!) - albeit still very loud, but I'm sure if you are after a clicky keyboard you know what you are getting yourself into in doing that.

Keyfeel is very consistent across the board, stabilisers are on the better end of things despite being so simple on the non-space bar keys, somewhat heavy. Caused me to miss some presses at first, but soon adjusted - coming from very light linear switches this is no surprise. The tactility is very definite but not overpowering.

Rollover is 2 keys on here, but you will find combinations that can go higher - can find combinations of 8 or 9 including modifiers. Generally good around the WASD area, not found anything that caused me to miss any presses yet. Slight oddity in that the right Super key and Alt Graph are switched around, even more odd when it isn't on the new tenkeyless model just launched.

There is one thing to be wary of buying a Unicomp board or accessory keycaps and that is the printing. The quality of the print itself now is excellent, evidently they put some money into their dye-sub kit in recent times. However alignment isn't perfect by any means and they seem to have a fairly low standard as to what will get shipped out from the factory - leading to things like the left Super (Windows) key on my board having the legend printed practically against the bottom edge of the cap. However, Keyboard Co sorted me out on that one, so no complaints there :)

The keys being dye-sub will need some substantial action on a sanding disc to wear off those legends - not like some of the cheap pad prints that are out there. And being PBT caps aren't exactly prone to wear either! Unicomp have switched to a single-piece cap on the new production boards, rather than the two-part arrangement that they used to use, and this does result in a mildly different keyfeel and sound. I'm very happy with the result of that though.

The housing is generally fairly sturdy. There is still a metal plate underneath the membrane in these, although I understand it is of a reduced thickness compared to a real original 80s M. Some flex in the actual housing too, especially if you push down below the F keys. This means there is a little deck flex but it is insignificant - you basically have to grab and twist the board, or push fairly hard in the aforementioned area. I really cannot notice any whilst typing, so believe it is plenty sturdy enough. Still weighs a fair amount too!

The footprint may have been reduced from the original M, but this has been done by trimming down the bezel edges, especially towards the rear. The key area I believe is still all the same - so it's still a bit of a chunker! Really quite surprising how big it is, but that's part of the charm.

The only real bugbear I have with this unit is the intensity of the lock lights - absurdly bright blue LEDs. Generally not a huge problem sat behind the board in the normal position but lean forward slightly and you'll get a bit of an eyeful. Odd design choice, as is the woefully ugly legendlogo plate around this. However, you can get swappable ones of those, including blanking it off altogether if you so wish. I think it stands out less on this model in the black, so fairly tolerable in my opinion.

All in all, this is an absolutely wonderful keyboard, and would highly recommend it to anyone after a tactile experience that is just that bit better than you can get with even the clicky type MX-style switches.
Anonymous  11/03/2021
I remember these keyboards from when they first appeared on the IBM PC in 1981, they were fantastic to use with such positive feedback. I thought I would be stuck with the new 'mushy' feeling keyboards until I found this company. The keyboard they supplied seems expensive at first but is well worth it. I will cherish this keyboard, it is built to last.
Callum  09/03/2021
Ordinarily when people describe something as a 'joy to type on' it's merely a lazy cliche.

I genuinely mean it though. It actually gives me joy typing on this thing. I bought it as I grew up in the '90s typing on the original Model M, and took interest in mechanical keyboards as a hobby chasing that first, distinct high.

No mechanical keyboard I tried came close to this. This isn't just the real deal - it's even more real than I remembered it in my mind. It feels better than I dared hope. It's a wonderful keyboard, and the fine team at Keyboard Co. were a pleasure to deal with, too. I'm just delighted.
Richard  25/03/2021
It's a wonderful keyboard - I bought it to replace an old IBM model M which now needs to be repaired...

and The Keyboard Company were excellent to deal with - helpful, courteous, friendly - and a very very quick - next day - delivery;

I couldn't recommend them more highly
Ian  25/03/2021
Ah the Model M. Being old enough to remember it the first time around it was something that I have been looking to get for a while. The pandemic and lockdown has seemingly been good for the keyboard industry so getting one that was in stock was a bit of a challenge. The delay did mean that by the time the stock did arrive, the 'New Model M' was available so I went for one of those with the white and grey keys.

Having come from TKL keyboards with Cherry MX or some clone blues, the contrast in the keyboard is stark. The unit itself is substantial in both size and weight, which is a good thing in my book although it does make taking it from one location to another a bit of a challenge. The new tooling that Unicomp have developed has produced something that feels like it will last forever although time will have to tell on that one.

There are two key areas where I really noticed the difference coming from the aforementioned TKLs, especially browns. The first is the key switch feel. These are really quite different, as you might expect from an entirely different switch mechanism. They require a lot more weight than normal MX Browns and you might find that tiring. I am getting more used to it now but I still get the odd missed stroke because I didn't press quite hard enough (I am not a 'heavy' typer). The weight makes it feel a bit a bit slower when you are typing but the speed tests say that I am neither gaining or losing speed regardless of the keyboard I use.

The second most notable aspect is the noise. This keyboard is LOUD! Not in an annoying high pitched click way that MX Blue and clones are but in a much more thocky and old school way. The internet sound tests do a decent job in demonstrating the type of sound it makes but only once you have it in your possession do you understand just how loud it is in comparison. Whether that is a good or bad thing is up to you but it does make my MX Brown keyboard sound almost silent in comparison. At least, should anyone co-workerspartners in your work space be driven to violence because of the noise, they keyboard should make a handy and effective improvised weapon.

In summary it is very much a keyboard of contrasts. It is a new version of an old classic. Not cheap but is also partly hand made which leads to odd things like really sharp lettering on the nicely textured keycaps but the lettering isn't perfectly in line on all of them. It is new, but there are no media keys or the like. The colour choice of keys and the black case make it look great but Unicomp put a hideous logo and indicator plate on it (which I believe can be changed). The keys are wonderfully noisy and activate exactly when you expect them to but lack the light and crisp feel of a lighter switch. They are tactile without being over noticeable which is better than the almost linear feel the MX Brown has when you type with any real speed.

In summary, the feel and experience of the Model M is unique amongst an ocean of Cherry MX clones and RGB lighting. That said I don't think this is a keyboard for everyone. There are some great MX switched keyboards out there which offer a huge range of choice and customisation. The Model M does feel old (which is something perhaps most won't get because they didn't get to use them at school). I bought it purely for work. It is a workhorse. I don't think I would use it for gaming. If you can accept that this keyboard is very different from everything out there (well maybe you could argue the feel of a Topre is equally different) and can embrace its 'artisan' like imperfections, you will gain a great keyboard which has the potential to outlive you. If you don't, at least you will have gained a very effective doorstop, or anti-intruder weapon.

Finally, they Keyboard Company engaged in some really useful email chat before I ordered and delivered next day. I can't fault their service. They don't do cheap keyboards, we have Amazon for that, but if you want to support a British company that offers those higher end products I would wholeheartedly recommend them.
Frances  15/12/2020
I love the spaciousness and substantiality of this keyboard, and clarity when typing. I'm really pleased with my purchase!
Anonymous  14/12/2020
There's nothing like a buckling spring keyboard and to still be able to buy them brand new is so cool.

This has exceeded my expectations and I look for things to type now.