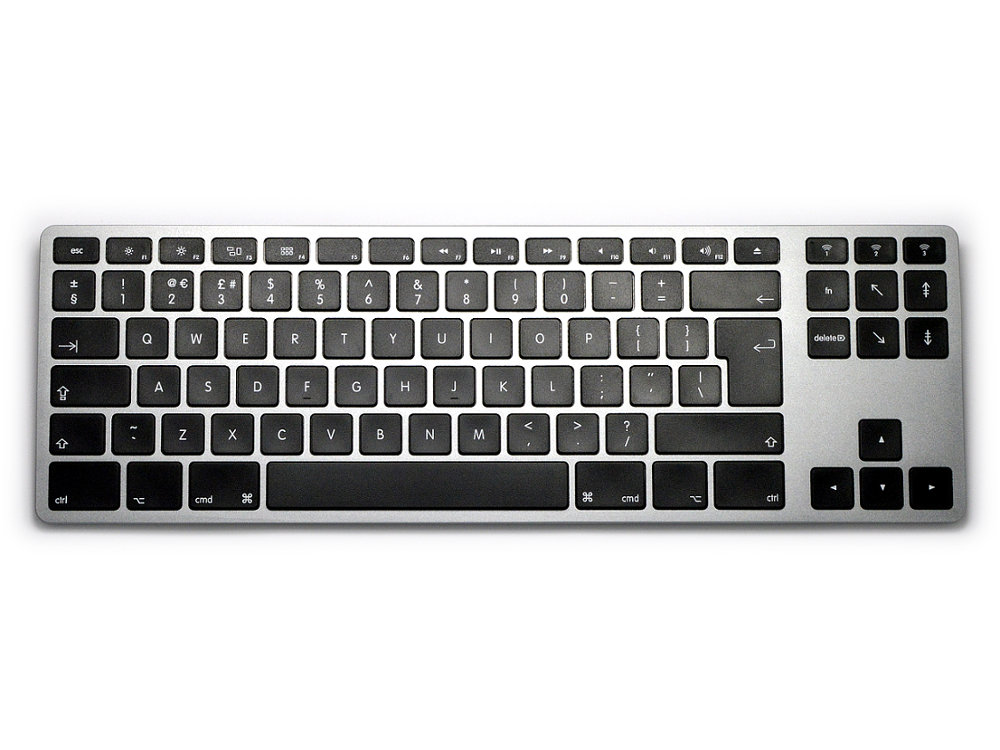 It has two features that enhance your experience compared to the regular Apple Wireless Keyboard:

Tushar  27/11/2020
After using this keyboard for a few days moving from an Apple keyboard, I was a little disappointed by the reactiveness of the keys. Granted it works, but quite often I will hit a key and it won't actually trigger. Upon testing, hitting the bottom left of a key doesn't trigger and I now quite often get missing letters. It needs a firmer press than an Apple keyboard. Also, there is more noise when typing and less soft padding when pressing keys. It could be my typing style and something I need to get used to. Originally, I struggled greatly moving to this large keyboard as the arrow keys are further away from the main keyboard. Something my muscle memory got used to eventually.
Martin T  14/11/2019
If you need a good portable keyboard that'll connect easily to several computers, you won't go far wrong with one of these. Time will tell how good the battery life is but it's easy to pair, and it works with PCs as well as Macs -- if you hold down Control when pairing it turns the Command keys into Alt keys, and the Option keys into Windows keys. Unlike many Bluetooth keyboards it has a proper Caps Lock light as well.

Keys are a nice size and feel, and the action is good too. Slightly more tactile and less squishy than a 2013-era Macbook Pro Retina. Not better or worse, just different! Nicer than the newer butterfly keyboards though, in my opinion.

I did notice one thing. Unlike some other Bluetooth keyboards I've used (Apple, Filco and Logitech) it doesn't ask you to enter a code when pairing. It does generate a new link key each time it's paired though, which is better than it using the same key every time.

If you were worried about privacy you might want to do your pairing well away from any other Bluetooth devices, but if you were that worried you probably wouldn't be using a Bluetooth keyboard anyway.

Apart from that, it's a very nice keyboard. If a Filco Convertible is great for putting in your suitcase, one of these is great for keeping in your carry-on bag. And that's where this one will be.
J  20/06/2020
This keyboards works great! I switched from an external Apple Magic Keyboard to this one in order to control two Macs and an iPad with the same keyboard. It's somewhat reminiscent of Apple laptop pre-butterfly mechanisms but is perhaps firmer requiring more actuation force, and typing definitely feels heavier than on Magic or butterfly mechanisms with more key travel. The function key controls for volume, expose, play etc are familiar are a great addition.

The keyboard itself is very similar to the apple wired keyboard, the keys are more clicky both in feel and noise, its a nice keyboard to type on. The bluetooth works as advertised and is both reliable and consistent. The keyboard doesn't sleep and drop the connection, it maintains a connection with the current device and immediately closes the connection with the previous device. The connection switching time is about 2-3 seconds and the keyboard does not buffer keypresses during the switch. It would be nice if it could maintain more than one connection (atleast for a while) to speed up the switching but it doesn't take long to get used to the timing.