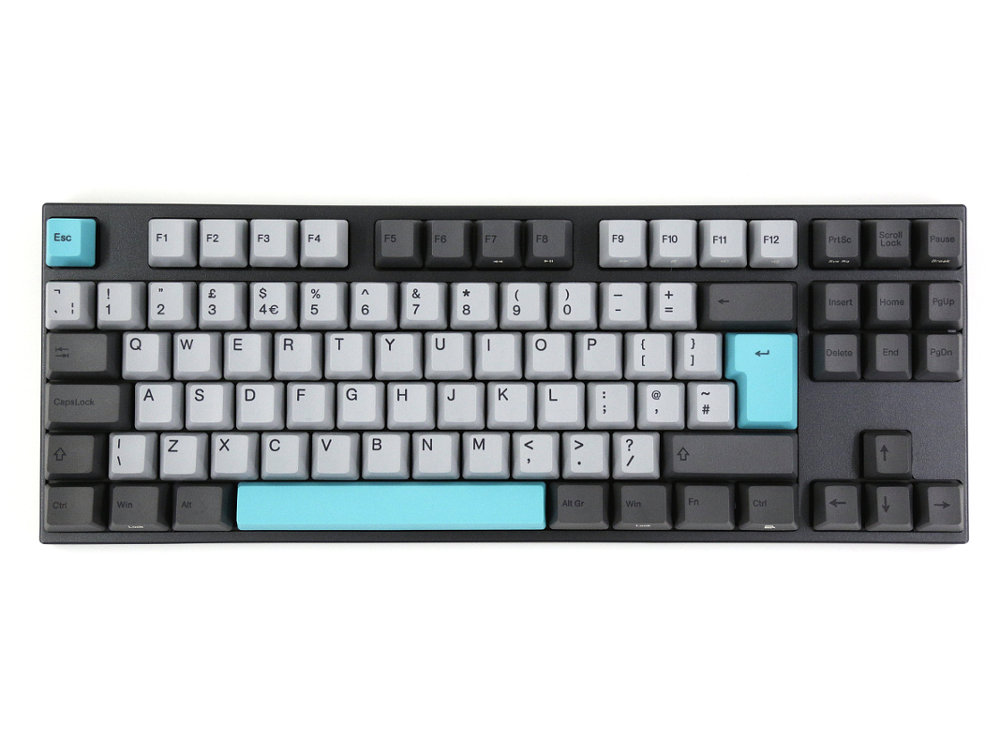 The MA88M Moonlight is a high quality, tenkeyless, mechanical, PC keyboard by Varmilo it has a charcoal case, black Iron base plate, white backlighting and the keys are dark and light grey with three cyan keys. The legends are black and dye-sublimated onto the PBT keycaps in a UK ISO layout, and it connects via a black detachable USB cable.

HenryHoverball  17/08/2021
This is an interesting keeb. It's nice and solidly built. The switches are a great deal lighter than Cherry Silent Reds,. despite both being 45g. Accidental actuation is something that happens all the time for me :)

It is also quite noisy- the construction of the switch body means that the unpadded switch upstroke is incredibly rattly, louder than silent reds, louder even than normal reds. The space bar sounds really clacky- worse than unlubed stabs on a Filco, with that rattle that they get.

The space bar doesn't have a very nice feel either, it's a bit spongy and accidental double-spacing happens fairly frequently. I don't know if this is mechanical or electronic, but it's a bit of a pain when typing long passwords.

Obviously, none of this is helped by adding o-rings to the keys to reduce noise, though it does make things quieter. The space bar is so loud, you really need to put a little bit of (thin!) sorbothane or similar inside to deaden the resonance of the upstroke.

Finally, the keycaps.. they are a lovely colour, a nice shape and texture and the printing is clear and crisp too. However, somewhat curiously for a backlit keyboard, they are not double-shot and translucent, so none of that light shines through the keys- a bit of a surprise.

Essentially, its not a terrible keyboard, but probably not at nice to use as my re-capped Filco with silent reds (highly recommended, but you need to change the caps). The accidental actuation issues make me wish I'd chosen the 55g switches, as clearly not all 45g switches are created equal.

Oh, one last thing- it uses a mini-USB cable, rather than USB-c, which won't please everyone.
Dan  16/08/2021
Couldnt be happier with the keyboard. Was delivered quickly in 2 days with safe packaging and included a nail file which is random 😂

Would definitely recommend keyboardco and will 100%order from them again