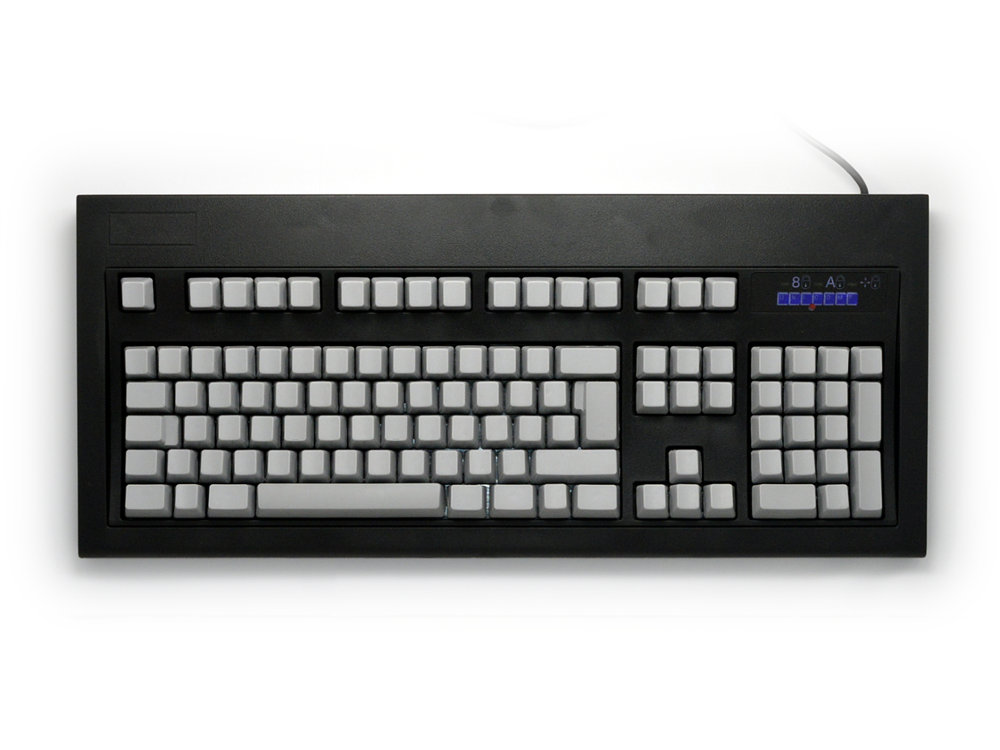 The new 'original' IBM buckling spring, Model M keyboard is regarded as a timeless and durable piece of hardware.
Many units manufactured since the mid 1980s are still in use today, with a buckling spring key design and fully swappable keycaps, these keyboards have been prized by computer enthusiasts and heavy typists because of the tactile and auditory feedback resulting from a keystroke.

This is blank with no printing on the keys, it has a 105 key UK/EU ISO layout, in black with a USB connector.

Adam G  21/10/2020
My first buckling spring keyboard, bought on a bit of a whim but I'm happy with the purchase. There is plenty written about Unicomp keyboards in general elsewhere on the internet, which I more or less agree with now I have one of my own. The keyboard is an ease to type on compared to the typical silicone keyboard. It is a little noisy (not suitable for a shared office perhaps, but fine in my home office) but it's not quite as loud as I had feared from reading some other reviews.

As for this particular model, the extra 'chrome' around the board is good for protecting the keyset itself, and to be honest it gives the ensemble a striking design that looks good on a big desk. The area above the function keys works well as a pen-shelf, and I have also found my little desk mic on a tripod can go over the numpad area. Just remember to mute when you are typing!

The blank keycaps mean you don't have to worry about prints wearing down, and make it suitable for any layout. That said I might have to put stickers on a couple keys just to guide the eye when I want to hit a shortcut while not touch-typing. And to jog my memory on the numpad! (By the way, it's not clear from the pictures, but I can confirm that the 2 home row index keys have the usual bumps to aid with touch-typing.)

I'm using this with a mac. All the modifier keys work fine though they are not quite in the order you might expect (another advantage of blank keycaps). The function keys seem to work as expected though I haven't extensively tested, or tried to get media controls working.

All in all a good purchase from a design and comfortability point of view. Just bear in mind it's on the larger, louder and heavier side.
Syn  05/03/2020
Bought these because I wanted a modern take on the original model M, and I got what I wanted. The mould is not that high quality and it's rough on the edges, but the blank keycaps (that avoid the popular risk of getting misaligned prints) and the buckling spring system is really impressive for long typing sessions.
Keep in mind that initially I thought there was something wrong with the keyboard when I played with it the first day because it had pressure inconsistency on various keys, but a quick google search and after a few typing sessions I realized that buckling sprinks break in after a while! So don't worry about this for the first couple of thousand words :)