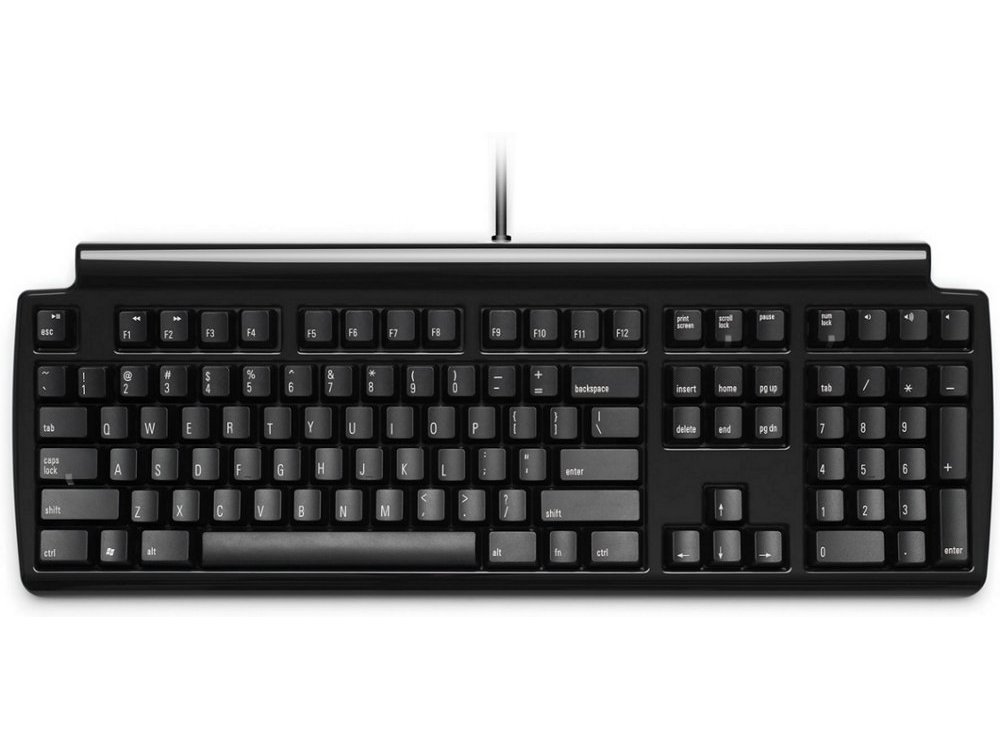 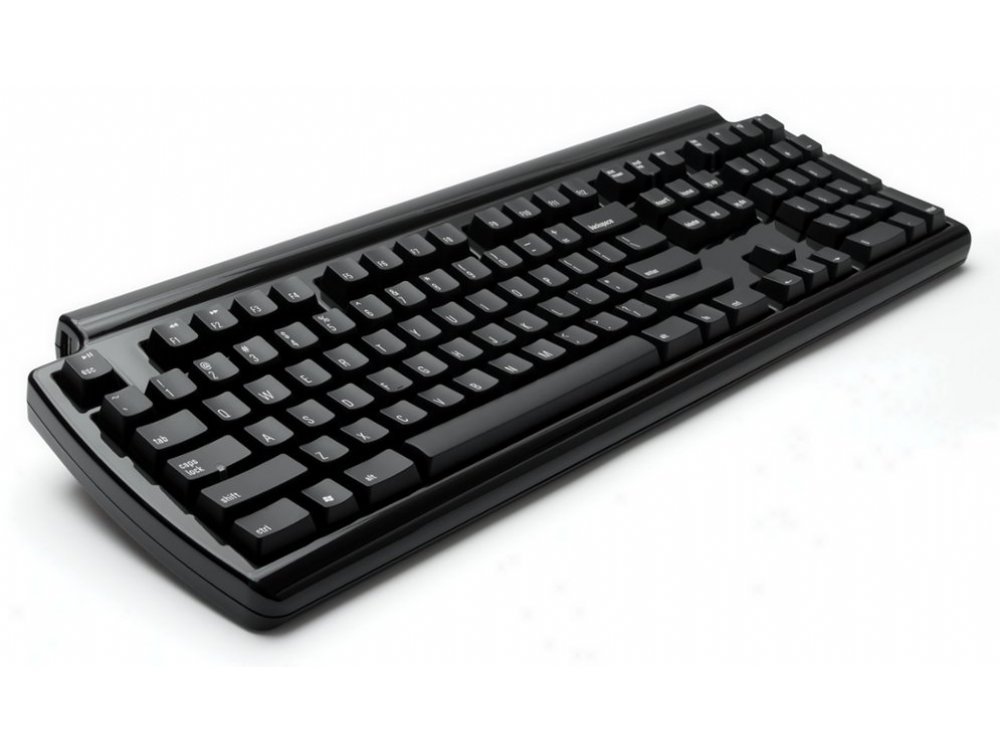 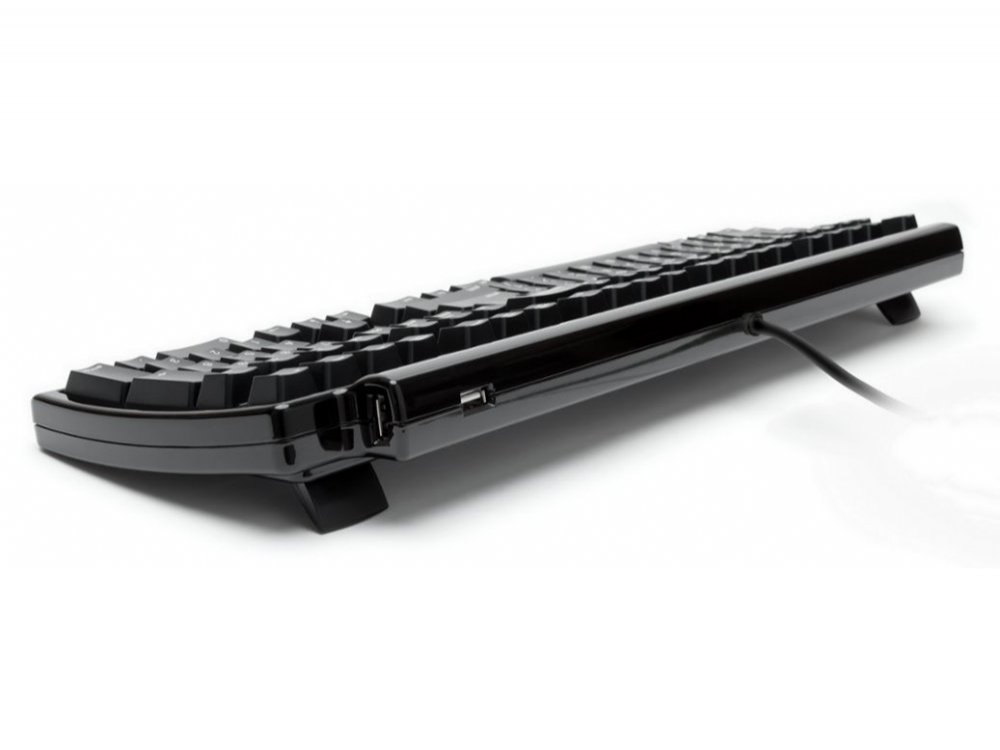 It feels amazing.
The Tactile Pro for PC in US layout, uses Matias' Click mechanical keyswitches. Praised by people who earn their living at a keyboard, they feel and sound so good, they'll bring a smile to your face and a devil-may-care attitude to your typing, offering the maximum amount of tactile and auditory feedback of any keyswitch available.

3 extra USB 2.0 ports.
Some keyboards have 2 USB ports - most have none. We're giving you three! You can plug in flash drives, digital cameras, your mouse, and more.

Laser etched keys.
All those symbols are handy, but what happens when they wear off? They won't. They're laser etched - burned into the keys with a laser - so they'll never wear off.

Sculpted keytops.
The latest trend in keyboards is to have very flat & wide keys, with little or no space between them. You see this a lot on laptops and netbooks. While they look great, they can also be a little tricky to type on. The flatness makes it very easy to slide out of home row and lose your bearings.The Tactile Pro bucks this trend. It has traditional sculpted keytops, curved to fit your fingertips, and keep you from sliding out of home position.

Audio & media controls.
Dedicated keys let you control Volume Up / Down / Mute. Plus, by holding down the Fn key you gain access to strategically located Pause / Play, Next Track, and Previous Track keys.

Tab key on the number pad.
For users who do a lot of spreadsheet work or accounting entries, we've added a Tab key to the number pad. It streamlines your data entry, and saves you time.

Ghosts busted.
Most keyboards allow only a few keys to be pressed at once, so they can't keep up with very fast typists. The result is called ghosting - letters missing from what you actually typed, or additional letters that you didn't type. The Tactile Pro has special Anti-Ghosting Circuitry to eliminate these problems. You can type as fast as you're able; the Tactile Pro will keep up.

Seems like I may have gotten one of the last units available from PC-Byte in Sydney for the great price of $99-shipped (says Pro-3 but a Pro-4 was delivered.) As they now say theyve sold out. Additionally, the PC variant of the Tactile Pro seems to be getting ever thinner on the ground. Not just in Australia, but everywhere, and my $99AUD price seems to be very good vs. other prices around.

Unfortunately Matias use a 7 key (vs 8-key 104-standard) bottom row with a 7U-spacebar, which means you cannot use a generic Taihao Alps replacement keycap set in full, which is a little irritating. Taihao should rectify this as the Matias is the most common ALPS mount keyboard currently available. I believe this is a carryover from the Apple board on which this is based.

Personal use case:
I use this board at work as a design engineer in a open office and Ive not been hassled by my co-workers. As it is about the least gamery commercially available mechanical keyboard (save Topre or Unicomp) it doesnt look out of place on the desk.

Key Feel:
Smooth, non-binding (maybe a little scratchy? When compared to a lubed or optical linear switch,) and distinctly different from a click jacket clickey switch. The tactility of the switch is more classic like a buckling or plate spring, where the tactile event is defined by a reduction in switch force. This is on contrast to Cherrys + clones where the tactile event is defined be a rise in switch force that needs to be overcome. Here the switch force rises gently then sharply drops off.

If you press the switch really carefully you can feel the second bump at the end of the key travel just. But in daily use, its a null point. Once past the tactile event the key easily bottoms out. There is no mush to speak of, whether on stabilised or standard keys.

The key switch registers after right after the tactile event. On some switches if youre really careful you can cause the click leaf to click without registering a key switch. But in practice this never occurs while typing.

The springs are pretty light (~55g) and Id like to put some 70g springs in them like was in the original ALPS switches. I like stiffer springs. So this is just personal preference.

Sound:
This is an open plastic case (switches are mounted on a metal plate.) As such the board does echo a little, and there is a little spring ping to speak of. The Costar stabilisers also rattle a little; Ill be adding some axle grease when I get the time.

In contrast to my HP OMEN-1100 that I use at home with Greetech Blues, this keyboard is much quitter. And does not give a thock when keys are struck hard.

I suspect once I dampen the case the classic ALPS sound will become more pronounced. The click leaf clicker gives a clean click unlike the crunch often associated with click-jacket switches.

Key Caps
As stated earlier, these are a thin lasered ABS with laser etched legends. On the black board, the laser etching is white. The font is fine. Not gamery, but nothing special. Just clear and easy to see.

Despite being ABS, the textured finish has proven resilient over the first 100,000 words or so. Thus key shine as yet has not been a problem. This is in very stark contrast to the Roccat Vulcan line of keyboards, where the mat keys shined after only a day or 2 of office use.

The key are somewhat sculpted (not sure of the specific profile,) and in conjunction with the curved mounting plate, give a good shape.

TLDR: Theyre fine, but nothing special.

Case:
Made glossy black polycarbonate plastic. Unlike the textured keys, the case does show finger prints, dust and surface scratches. I suspect that on the white version, this is less of an issue. The case is well built and does not rattle, but does echo a little on key press. A fact Ill be looking to dampen in the future.

With the kick feet closed, the key deck is inclined at 1. With them extended it rises to 9. For me anywhere between 7-10 is a good number.

The case also features a 3-Port USB Hub a nice-to-have feature that I with more wired keyboards had. It would be even better if it were a USB 3.X hub. But its miles better than nothing. Great to plug your phone into, or a flash drive to grab a few small files.

Key wobble:
Is more pronounced than on the greetechs (which are honestly really good in this regard,) but nowhere near as bad as gen-1 LK-Optical switches (Bloody HP Sequencer) or other switches Ive tried recently. Kind of middle of the road in line with Roccat Titan browns.

Back-lighting:
Only on the CapsNumScroll lock keys. There is a small green LED that illuminates when the lock is active, as opposed to a led mounted somewhere else on the board. Generally speaking, there is no key back lighting of the key legend.

Typing:
As stated, this is my work daily driver and Im much happier with it than my Roccat Vulcan 80. Layout is identical but the Titan Browns on the Roccat actuated before the tactile event, which was really irritating. This is a proper typing board. And it feels and sounds like it.

USB cable:
Take your hipster Aviator Cable elsewhere. Its a standard black USB cable that comes out of the centre at the rear.

Gaming:
No idea. I had it delivered to work, and thats where it still is.

Conclusion:
Is it as good as an O.G. Acer KP101A with Blue SKCM ALPS? NO.
Is it a good modern alternative that you can buy new? YES.

If you can get one for at or around $100AUD as I did, its a great deal (and Im glad I bought it.) However, availability in Australia and of the PC version especially seems to be drying up. With the PC version not even being listed on the Matias website?. It feels better than most current click-jacket clickey switches (though I have developed a soft spot for the Greetechs it must be said,) with no crunch and a definite tactile event (not a rounded event like cherry.)

It can be used in a modern office, but they also do a dampened tactile (non-clikey) and linear version of the board as well if thats more your style.

If youre made it this far, thanks for reading and I hope you found it useful or helpful.

Regards
Jordan
Gene  02/01/2020
Wonderful keyboard. Just the right feel and sound on the keyswitches, and something that you can't really find in Cherry MX switches or variants. It's a very nice looking, well made board.

I especially appreciate the very fast order processing and international shipping from the U.K. Cheers!
Sebastian  02/05/2019
Keyboard is better than I expected. I was researching it for some time, to choose between cherry and alps switches. I decided to go with alps made by Matias - it was good decision, I like how that switches works and the sound of them.
I like the build quality of this keyboard too. It's solid quality. I don't like this shiny plastic material, it makes keyboard easy to look dirty.
Caps are not easy to take off, you need to pull them harder to do it - I was afraid to break something for the first time. It's good to have good keycap puller for it.
By company mistake I had silent version for a half of day and I liked that keyboard too (it's really silent mechanical keyboard). Thanks to that mistake I had an opportunity, to compare both keyboards - thanks The Keyboard Company for this mistake :).
Silent version is better for home or quiet office definitely.
Anyway, it's a well made keyboard so I plan to buy mini but silent version for home too (or Matias 60% Quiet Click keyboard)
markchodotcom  11/10/2016
It's pretty good. Clacky but in a good way, reminds me of the old Mac keyboards from twenty years ago. There's quite a bit of play in the keycaps, as in they have a bit of wiggle left and right. It's not a bad thing but it was a bit surprising at first.

I have the silent version as well, I prefer that version but I would never say no to this one either.

Unfortunately, I think the R key on mine is a bit funny, sometimes get a double press with it.