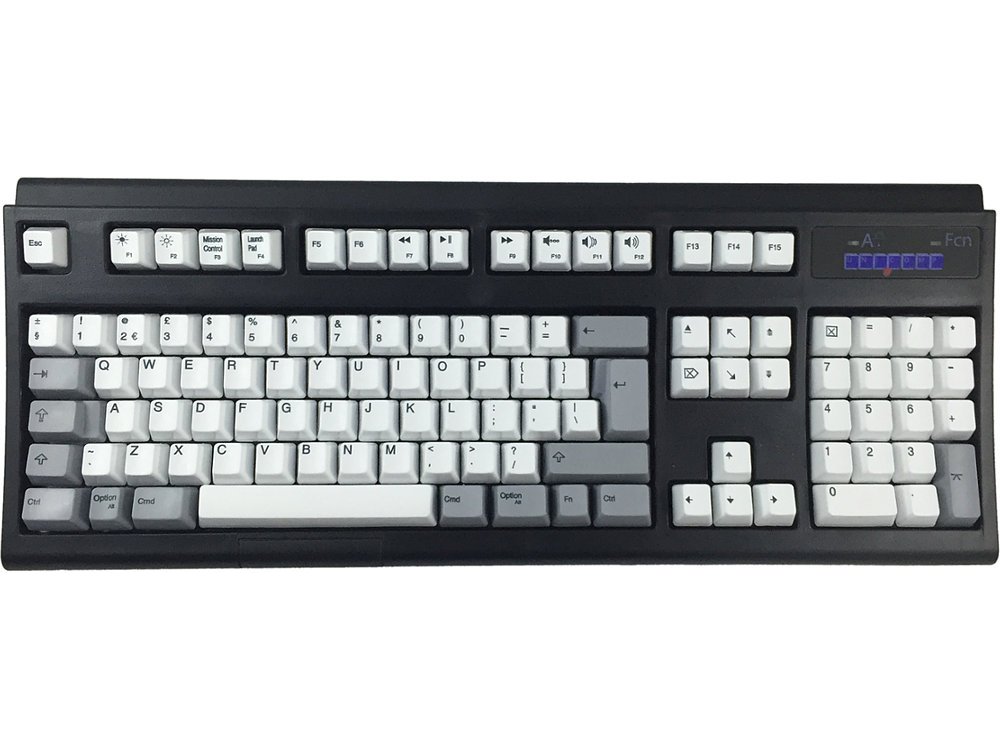 The Spacesaver Mac is the Ultra Classic configured specifically for Apple/Mac users. The SpaceSaver Mac offers the touch and feel of the original IBM model M buckling spring keyboard merged with some of the system and audio controls seen on Apple and Mac keyboards. SpaceSaver Mac allows for convenient control of iTunes, Safari and other applications running on Mac OS X based systems.

The Spacesaver Mac is the Ultra Classic configured specifically for Apple/Mac users. The SpaceSaver Mac offers the touch and feel of the original IBM model M buckling spring keyboard merged with some of the system and audio controls seen on Apple and Mac keyboards. SpaceSaver Mac allows for convenient control of iTunes, Safari and other applications running on Mac OS X based systems.

LightBulbFun  11/06/2020
after putting it off for a couple years due to it being a lot of money to drop on a keyboard!

and im very glad I finally did order one, its an awesome keyboard to use and type on, and very much lives up to the hype for me! and im very happy with it

and as an Mac user im pleased to report this OS X specific version does work well with OS X, most of the special media keys work as labelled,

TL;DR
im very happy with this keyboard and highly recommend one to anyone who does a lot of typing etc
timblewee  01/08/2018
I love this keyboard. It has taken my right back to my college days in the very early 90s. Typing on this thing is sublime. I was a little reticent about ordering one after reading the reading and watching the reviews on youtube, mainly due to the comments about the build quality. I need not have worried. The one I received was in great shape. There are no creaks or wobbles in the casing. The print quality on the keys is great with no imperfections in the keys as far as I can see. Maybe Unicomp have upped their game for 2018 as my keyboard was manufactured in February this year. All I can say is that I cannot seem to find the problems with mine that others have had with theirs.

Typing on the buckling springs is joy, I don't play games that require fast finger inputs so I can't comment on the gaming ability of the keyboard. But if other reviews are to be believed it's not that good for this purpose. Other reviews were also correct about this being a very loud keyboard and I mean loud. This is not the keyboard for you if your computer is a shared room or office. I suspect that the noise would get on other peoples nerves after a very short time. I actually like the noise, I find it reassuring and makes me sound more productive somehow. Like I'm really getting stuff done.

Coming from a Mac aluminium chicklet type TKL keyboard, this obviously feels and sounds very differently and did take a bit of getting used to at first. However once I was used to placement of the keys I found that it dramatically increased my speed and accuracy when typing. The feedback in the keys is amazing and despite the actuation force being rated at slight less on my original Mac keyboard, I find these keys easier to press.

I would love to order another one for work, but alas I would fear for my safety if I started typing on one of these around my colleagues.

As for the Keyboard Company themselves, I had excellent service from them. They responded to email regarding delivery very quickly. My keyboard was with me the next day. Overall an excellent process of ordering and delivery. I would have no qualms about ordering from them again.
Krisztin  11/03/2020
Takes some time to get used to is but no question the best typing experience I ever had. Perfect feedback, faster typing and yes, it is loud (at least cherry blue loud).

Also a big thumbs up to Keyboard Company customer service.
Simon Taylor  11/09/2018
I've not quite had this keyboard three years, and it's now failed. Was great, lovely feedback and clicking action, but about two weeks ago, the space bar stopped working, now the whole thing has stopped. Reading up on these keyboards, there's a dodgy connector inside, that can corrode, but it's the first time I've ever had a keyboard fail like this.

It was good while it worked. :(
Nejc  20/11/2017
I love the keyboard. Keys feel and sound exactly the same as an old '94 model M that i used to have, maybe a bit crisper, since they are brand new. The top row is used as media keys by default and F1-F12 when you press the Fn modifier key. The functions can be inverted (F1-F12 by default) by pressing Shift+Fn. Cable has a regular USB plug and is not detachable.
The keyboard works perfectly on mac, linux and windows (including the media keys). I had no problems rebinding keys in software (like another reviewer on this site), it works as you would expect with any other keyboard.
Regular size keys use the two-part keycap (same as my old Model M) and the wider keys (Cmd, Shift, Tab, ...) are made out of a single piece of plastic. The keys and caps are completely compatible with the old model M.
The only problem i had with the keyboard is that the plastic bezel around the keys could be better quality. It squeaks a bit when you press it, but it's not really a problem when typing.

I would recommend this keyboard for anyone who likes the feel of buckling spring switches but still wants some of the features that modern keyboards have (like volume control). It's not cheap, but i think it's worth the money.
Carl Smith  30/03/2016
Avoid this. I returned mine as faulty. It is not a Mac keyboard. It's a Windows keyboard that has been rewired to act like a Mac keyboard, but it doesn't work. Even worse, because it's hardwired, there's nothing you can do in software to fix it. If you try to remap some keys, others get remapped, because they are not really separate keys. It's a total bodge.
Ell234  07/01/2016
Love it already, its amazing how much faster i am using this over a normal keyboard. fast shipping well packaged :)