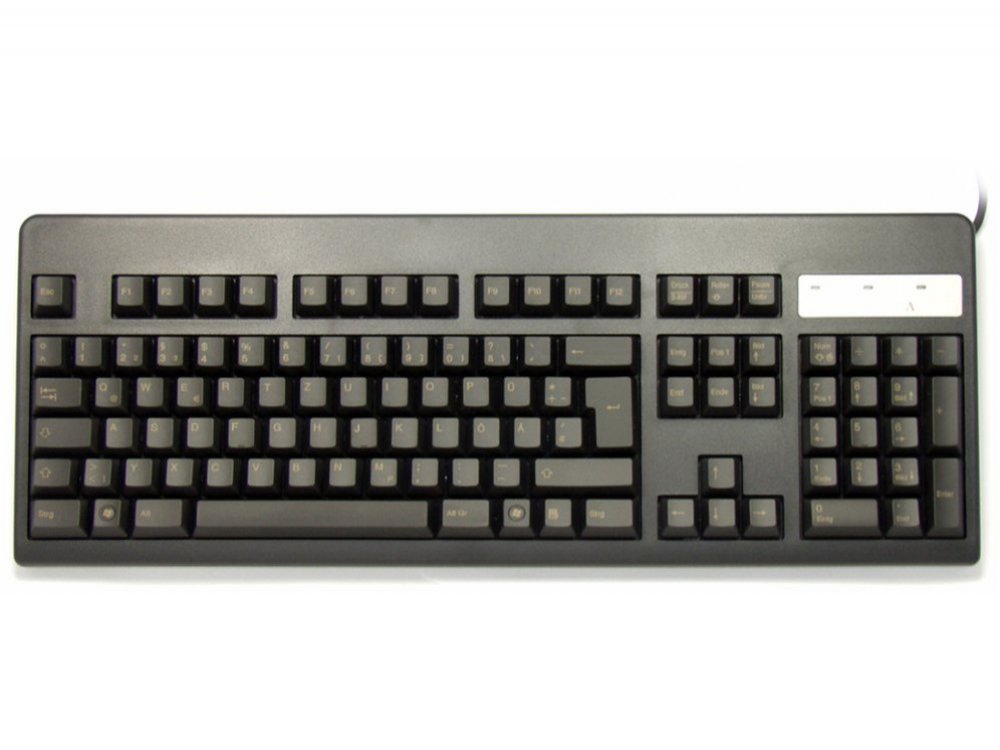 The Topre Realforce105UB keyboard, exclusively produced for The Keyboard Company in full 105 key German layout, is a joy to type on. It incorporates Topre's patented 30 million key life cycle non-contact electrostatic capacitance switches with a switch weight of 45g. The light gold on black keycaps with their tactile feel and N Key Rollover ensure fast and accurate input..

The Topre Realforce105UB keyboard, exclusively produced for The Keyboard Company in full 105 key German layout, is a joy to type on. It incorporates Topre's patented 30 million key life cycle non-contact electrostatic capacitance switches with a switch weight of 45g. The light gold on black keycaps with their tactile feel and N Key Rollover ensure fast and accurate input..

Dawid  04/02/2022
My new keyboard arrived without any problems and there was no damage caused by tranpsort or anything else. At this point I would like to thank The Keyboard Company for the quick realization of my order. The keyboard go to me within 24 hours. Thanks a lot for this!
Toni  28/02/2021
Paid an amount of money to get that baby imported to germany. As far as I know currently the only available Topre keyboard with default german layout. Superb quality and a real heavy weight, this one will surely last decades until it has to be replaced! Highly recommended!. By the way thanks to keyboard company for the uncomplicated transaction.
Dennis  17/02/2021
Very happy with the keyboard, my first go with Topre and enjoy it very much. Coming from a line of Cherry switches on previous boards, Blue, Black, Brown, Red, The feeling of the Topres is amazing so far. The build quality and PBT keycaps is also a very nice.
Heiko  02/11/2020
All I can do is to confirm the exceptional quality of this keyboard, as mentioned on many places here and elsewhere. I was really looking for the perfect keyboard, and I'm glad that I found this one. My hint is if you're using this (german) keyboard with a Mac, use the freeware Karabiner-Elements to fully customize the keyboard that it fits perfectly, the native macOS integration is not that flexible. The only slight improvement proposal I have is that it should be capable also of establishing a bluetooth connection.
moeNES  12/02/2017
I have never owned any kind of professional keyboard, just an apple keyboard supplied with my iMac. Maybe my experience is not enough to properly evaluate different kind of switches or other more advanced keyboard concepts like the butterfly switch mechanism Apple uses on its own MacBook products.

Quick summary (TLDR):
+ Extremely unique switch feeling (nowhere to be found)
+ Topre thock (so satisfying you can't type on other keyboards anymore)
+ Switches are quiet compared to the Cherry MX line
+ Combination of linear and slightly clicky, but very rounded feeling
- less fatigue for your little fingers
+ Super amazing capacitive switch technology
+ Super high build quality, feels very sturdy (Made in Japan)
+ High Quality PBT switches for maximum durability (doesn't wear out)
LOVE IT :3
Anonymous  12/01/2022
Bought this keyboard in late 2018. It's now early 2022 and it suddenly hit me that this thing has been in perfect working order for over 3 years now without requiring repairs of any kind, i.e. longer than any other mechanical keyboard I've ever owned.

The killer feature here is that while providing a great feel it's super-silent. In the past I've often had trouble with the noise from mechanical keyboards disturbing coworkers when sharing an office or family trying to sleep when hacking away late at night. Not so with this keyboard.

So I ordered two more out of fear that mine might one day break and I could find myself without one. They recently arrived and I am just as happy with the new ones as I was with the old one.
Anonymous  17/02/2021
Keyboard is superb as you woudl expect but unfortunatelly aftermarket keycap choices are non existent for the german layout. Initially I would have preferred beige or white but the gold on black is growing on me. Keyboard Company shipped lightning fast and it was a superb experience doing business with them
Anonymous  05/05/2020
I am writing this comment on behalf, since this specific keyboard is for my daughter. It just arrived today and I have to say it feels great even typing a few words :-). It is slightly different to the one my husband ordered a few years back. (Back then he read up on Cherry MX, the clicks and so on and found Topre during that search.) He ordered the white US-version of this one and maybe it's just the colour that gives the surface a different touch.
The reaction of the keyboard is great, the clicking makes you feel happy :-) and the weight of the keyboard shows the quality (in my opinion)