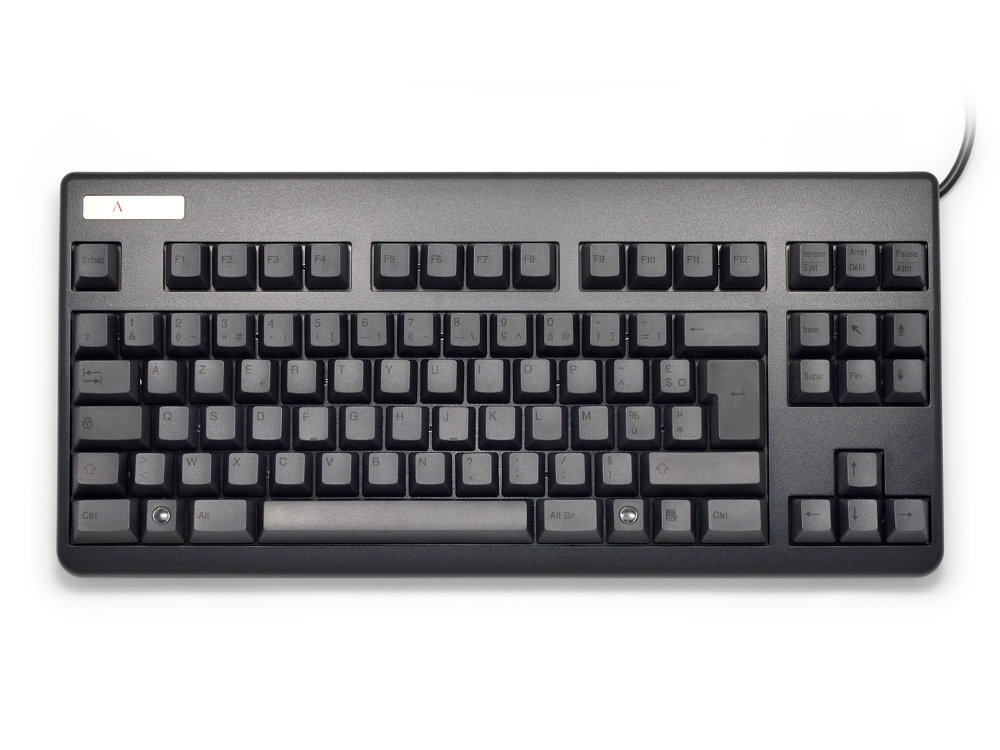 Now available for the first time and exclusively produced for The Keyboard Company, the Topre Realforce88UB keyboard, in French layout, is a joy to type on. It incorporates Topre's patented 30 million key life cycle non-contact electrostatic capacitance switches with a switch weight of 45g. The subtle black on black keycaps with their tactile feel and N Key Rollover ensure fast and accurate input.

JohnB  23/05/2017
The board itself is kind of ugly with its big hunk of plastic at the back and the rounded, vintage edges. I would've rather have the sleek simple elegance of a Leopold or Filco. It also comes with super ugly yellow ZQSD keys for some reason.
The upcoming RealForce RGB (made in China) will have a much better aesthetic and be less expensive. However it uses ABS keycaps, and I really wanted to Real Realforce experience.

On that regard, the keycaps are awesome. I love the feel and it's great to know that it won't become super shiny as my work Leopold currently is. For some reason the spacebar is supposed to be ABS though. I have absolutely no idea why. I guess I'm going to have to work with a shiny spacebar at some point.

About the feel, it's a little mushy at the bottom, but the snappy iconic thonk is also well present and overall gives a really snappy luxurious feel. It can be underwelming at first because your fingers will focus on the mushy part. But use it for a little while and the feel grows on you a lot. The stabilizers are also great, giving a much more solid and precise feel than either costar or cherry stabilizers on MX boards in my opinion.

My MX brown board kinda feel like toys now.

However do note that this board doesn't have a detachable USB cord (which feels very bulky btw) nor dip switches or functions like disabling the windows keys.

As a long time user of MX brown, I was afraid the 55g Topres would be too much. And even the 45g on this board are a little bit to heavy, especially if you hammer on the board like crazy after drinking 20 coffees and having to finish a 2000 word emails in the next 10 minutes. That situation will tire your fingers when it was fine to do on MX browns.
Tertium  13/01/2017
The order was dispatched without delay, and arrived soon and in perfect shape. The keyboard looks and works flawlessly, and is a real pleasure to type upon. I appreciate the feel, the sound, the build quality, and the ISO layout in the tenkeyless form factor.

The only surprising moment was the switch weight, which is not at least to my feeling completely uniform. Escape, Enter, Backspace, and some modifier keys feel quite lighter than the letter keys. I found that I rather like it this way, as the lighter keys are on the periphery of the keyboard, and thus are easier to press with a little finger.

All in all, I would recommend this keyboard to anyone who is not intimidated by the price.