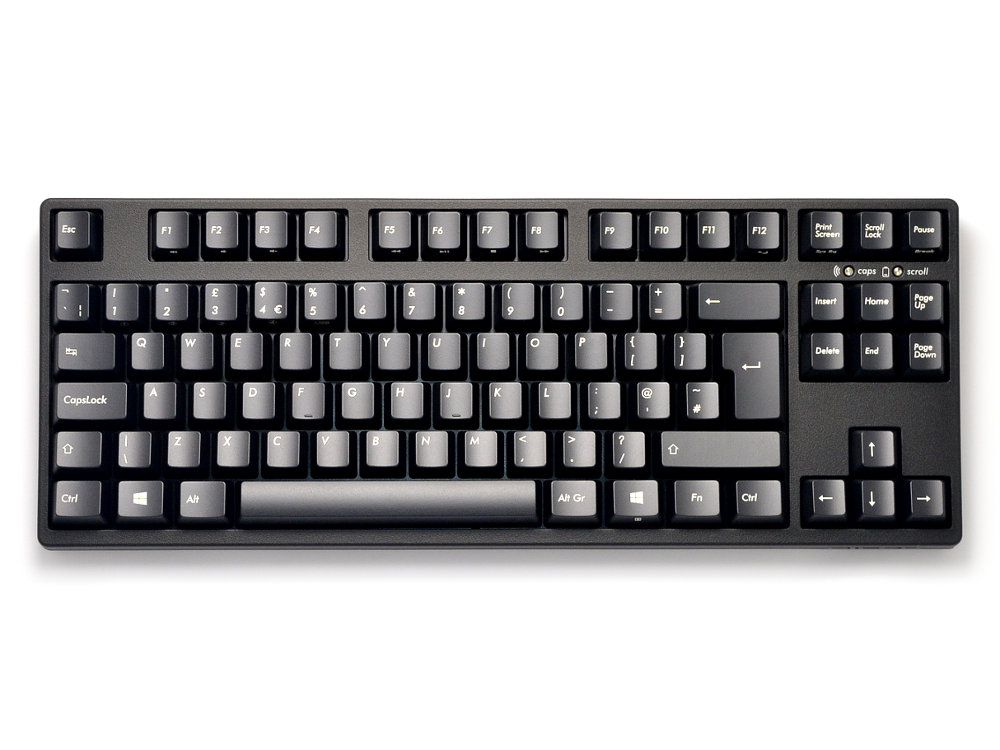 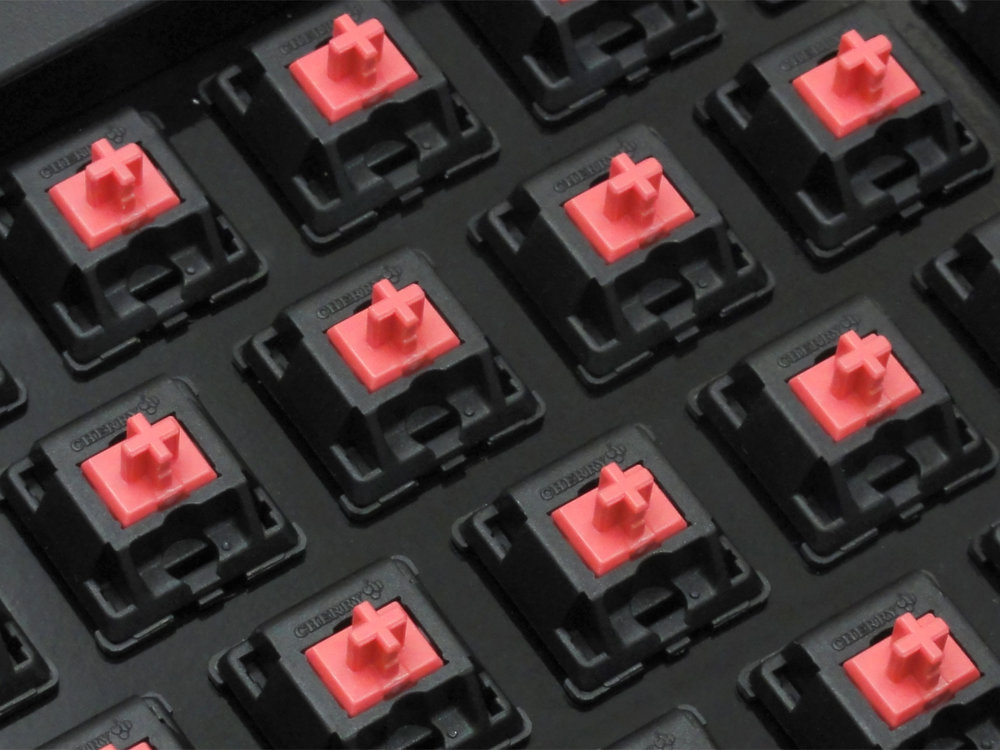 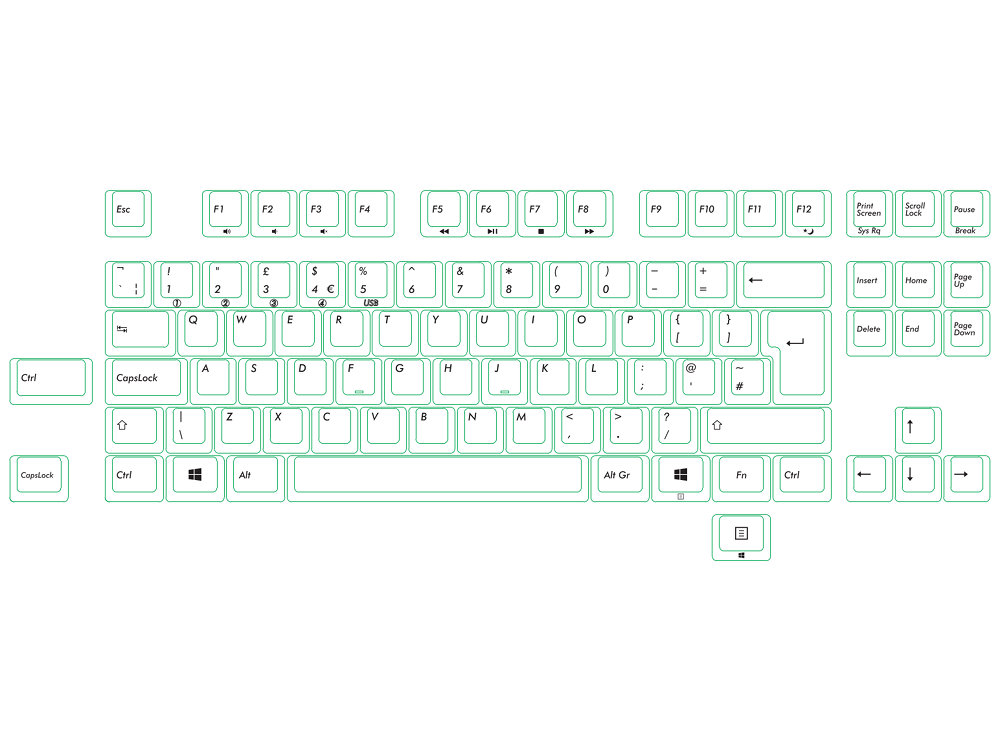 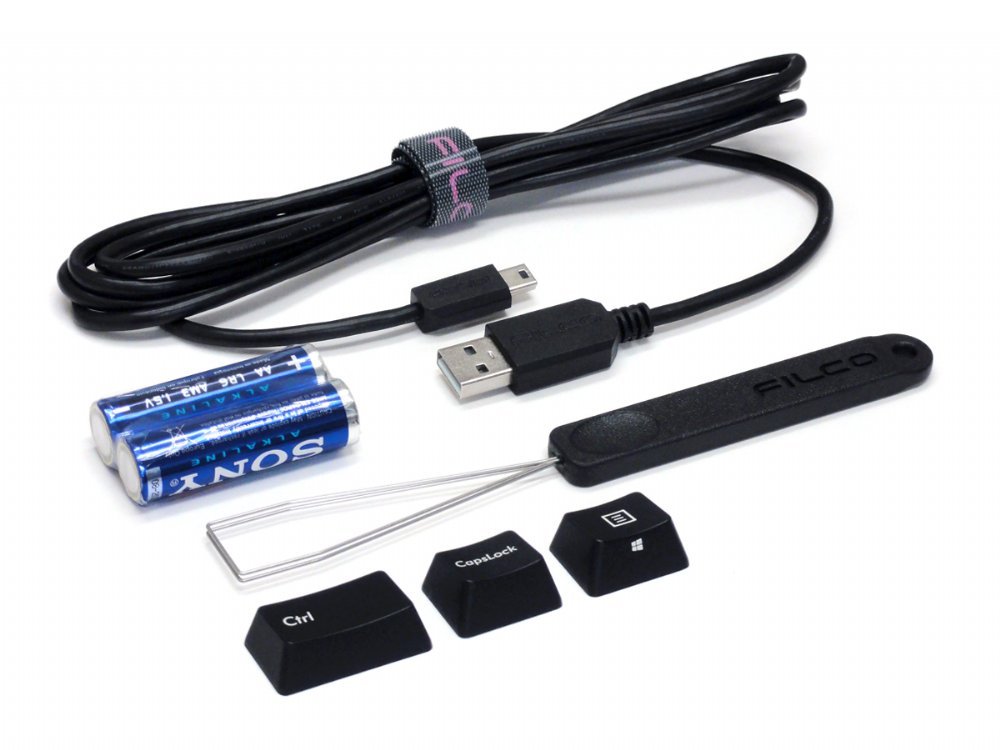 The Convertible 2 Tenkeyless keyboard from master keyboard makers - Filco. This keyboard is 'convertible' from a USB wired keyboard to a Bluetooth wireless keyboard, and you don't even need to unplug it from your PC. It combines the high quality typing feel of Cherry MX switches, steel mounted in a rock solid body all put together in a very slick package. These keyboards just make you want to type, now on all of your devices.

Average battery life is about 6 months based on 5 hours use a day, the keyboard can be used without batteries, powered by a USB charger or PC.

AG  08/12/2020
Spendy but I love the keyboard, but then I knew I loved Cherry MX red switches already. Nice action and liking the lack of wires with the Bluetooth option. Good chunky feel to the keyboard so it doesn't move around on my desk.

Media keys are bonus, makes it much easier to change volume, mute and startstop music without having to find whichever window something is playing in.

Would have liked to been able to buy the Ninja version of they keycaps but sourced a set of side-printed PBT keycaps elsewhere.
F Maguire  16/06/2020
Since starting working from home I was struggling with an american mech keyboard that I couldn't configure correctly. That has instructions and software, but it still didn't do what I wanted. I missed my filco majestouch from work so much (terrible default Dell HP keyboards) , I had to order one for home. Plug and Play, worked first time. No issues. I am using red silent cherry switches, it is quieter than the brown switches that started to fail in American keyboard. I would have liked a USB C option only because I have a few 6ft cables that I use (I will buy a retrofitupgrade kit if you make one, please :) ).

GREAT Keyboard, just works, excellent quality. My PC laptops will never be without one again. Thank You.
David MV  21/04/2020
In summary: a very good piece of equipment.
I won't discuss the switches, as these come to personal preference, but I'll just mention they are not (too) noisy which is great.
My main requirement was Mac AND Bluetooth. Prior to this one, I tried a Logitech G915 which I returned as it clearly was not compatible, and a Drevo Calibur V2, but the lack of a dedicated f-row was not an option. So TKL is really my sweet spot.
This Filco covers both points. The keyboard is reasonably compatible with a Mac, provided you use Karabiner-Elements to get the layout you need. The only hiccup is the fn key that is proprietary to the keyboard (afaik). The bluetooth connection is rock solid, not only with the Mac but also with an iPhone and an iPad Pro. It changes from one to the other very quickly.
It is really heavy, and clearly very well built. The keys are precise (though I don't like the colors, but that is en route to be fixed ;-)

The instructions are not very clear though, and you might need to try couple times. I don't give it 4 stars for 2 main reasons:
1. It needs AA batteries. For the price, I would have expected a rechargeable battery.
2. It uses a mini-usb connection. Again, a usb-c would have been the correct choice.
It IS expensive, but well worth the price in terms of build quality.

As a side note, the Keyboard company has been perfect in terms of customer support and sales experience. Would definitely recommend and buy from them again.
Graham  13/01/2019
These are lovely keyboards. I've only really used it via the USB socket so far, so can't comment on the bluetooth support.

Before I chose what to buy I was lucky enough to be able to try a few boards with different switches in. I had expected myself to prefer MX Brown switches, but found that the tactile bump arrived a bit too soon (it confused my brain, and threw my typing off kilter). I thought this meant that I found browns too light, and that (therefore) I'd find MX Reds too light as well.

And I do; I find reds too sensitive and I get a lot of accidental key presses. Silent reds are nominally the same weight as normal reds, but for some reason I don't produce the same accidental characters when typing on this board. So I interpret this as the silent switches feeling slightly firmer than normal reds.

When I was testing different keyboards I also got to try Topre switches, MX Blue, Brown, Black and Red, in a variety of different boards. The base that the switches are mounted on really does make a difference to how a switch feels, and the platform that Filco mount their boards on is very very solid. I think my preference for MX Silent Red switches is probably a preference for MX Silent Red on Filco; they might not feel quite so solid on a lightweight plastic chasis.

I've since tried a Vortex Poker 3 keyboard with MX Clear switches (which have a tactile bump, but are a bit heavier than browns). And I really like those too. Silent Reds are a lot lighter than Clear switches, but they have a certain positivity to them that I don't experience when typing on standard reds or browns.

Since I bought my Filco I've spent a little too much time online reading about mechanical keyboards, and became interested in the different kinds of plastic that are used to make the keys themselves (or keycaps). ABS and PBT are two popular options. They also come in different shapes, or profiles (e.g. DSA, DCS, SA, Cherry, OEM).

Filco use ABS plastic and an OEM profile. They're good, but I grew up typing on Cherry profile keys. While similar, they feel ever so slightly different. So I bought a set of blank keycaps in Cherry profile, made from PBT plastic. The texture of the PBT is slightly less smooth, and the board now feels very luxurious to type on. I can't imagine a nicer board to type on.
Anonymous  04/10/2020
Great product, highly recommended.
David  28/07/2020
Manual is terrible. All the information is their but not very well presented.
Pressing the Space bar does not re-start my PC in the same way as my previous RF dong did. Bluetooth is therefore not advantage and you have to buy a separate dongle.
The keys feel a bit soggy; not sure they are genuine Cherry Red keys?
Shaun  03/05/2020
This thing is the best keyboard I have ever used, bar none. The option for Brown switches, instead of the more common Red is a welcome feature. I rarely use the wireless connectivity, but when I do it works excellently. Not much to say really, an extremely heavy for it's size keyboard with absolutely no flex or rattle, unlike the half dozen competitors I tried. Would and have recommended to friends.
Simon  17/02/2020
Thought long and hard about spending this sort of money on a keyboard, and I think that it is a good investment. The keyboard action is smooth and quiet and the base is solid. Pairing was easy, once you worked out the meaning of the convoluted instructions, and I had no problem pairing with, or switching between, 2 computers and my phone. Good service from Keyboard Company, too.
Rob  15/07/2019
Great service, great keyboard.
Martin T  05/07/2019
Having become used to a Majestouch 2 Silent Red as my regular keyboard, I bought the Convertible TKL Silent Red as a keyboard for travelling.

Build quality is superb as you would expect for a Filco. The pairing instructions aren't entirely clear but you get the hang of it fairly quickly and it's not something you do particularly often.

My only gripe, and it's a minor one at that, is that the volume controls are not in the most obvious order -- Fn-F1 is Volume Up, Fn-F2 is Volume Down and Fn-F3 is MuteUnmute. You normally see Up and Down in the other order. But if that's the biggest complaint I have, that tells you how happy I am, and it would be churlish to dock a star solely for that reason.

Superb service from The Keyboard Company and highly recommended.
Steve carter  09/07/2018
Very happy with keyboard and service! First pairing of each of the 4 slots easy.
Instructions not immediately clear on how to re-pair individual slots (I think the reset button applies to the currently selected slot)
Switch to usb is automatic on plug in. Layout (ISO) and key travel are great.
I got silent red switches which are noticeably quieter in both directions of travel than Brown, and noticeably heavier. Very pleased.