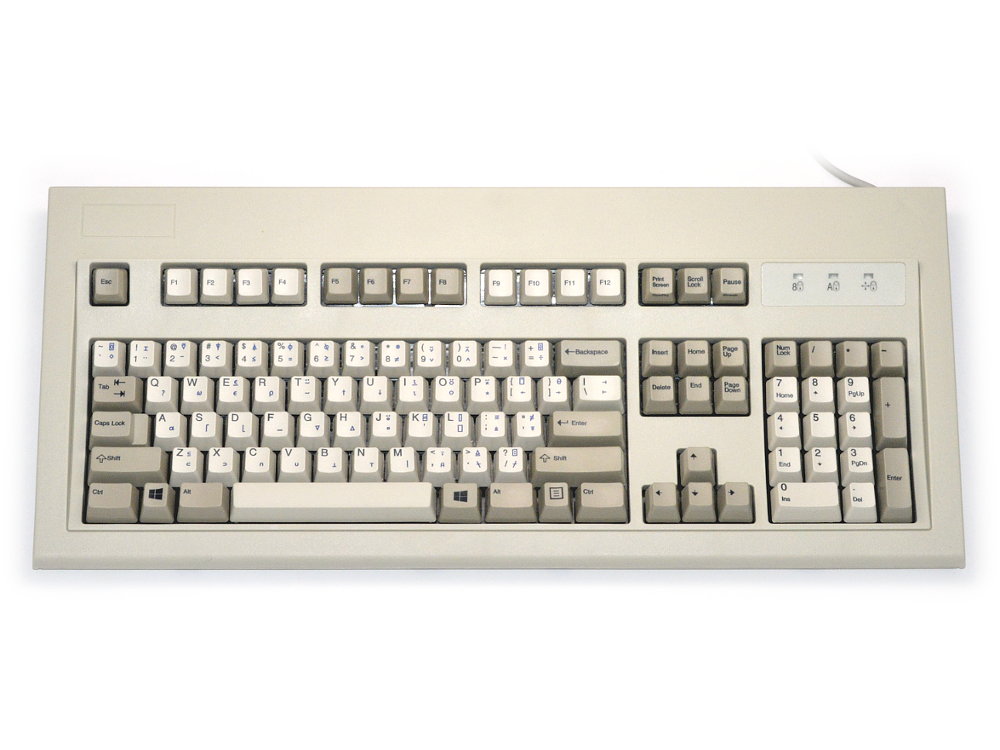 The new 'original' IBM buckling spring, Model M keyboard is regarded as a timeless and durable piece of hardware.
Many units manufactured since the mid 1980s are still in use today, with a buckling spring key design and fully swappable keycaps, these keyboards have been prized by computer enthusiasts and heavy typists because of the tactile and auditory feedback resulting from a keystroke.

Now manufactured by Unicomp this model has the standard USA 104 key layout with aditional APL legends.

rvjansen  27/11/2020
A personal note. When I started out as a systems programmer in around 1986 I was the youngest of the group and I received a brand new 3179 G(raphical) terminal, that unfortunately was delivered with a keyboard with, apart from the usual alphabetic characters, a set of squiggly signs; it was an APL keyboard. Nobody wanted it. I got used to it fairly quickly, and apart from that, there was no real alternative, these terminals cost upward of 10.000 Dutch Guilders and this one would be mine. With the flick of one red lever it would slowly glow to life, I used to be logged on within half a minute and could work uninterrupted for the rest of the day. I never learned APL, although we had it on the system. I never even was interested in getting the signs from the keys on the screen.
Fast forward to 2020. I live part of the year on the island of Aruba, and I left all my good IBM Model M keyboards there. Back in Amsterdam, COVID-19 struck the world and we were stuck in the old country. When I accepted an assignment, I quickly longed for a Model M and decided to buy one. Choosing between the available Unicomp models, I wanted one in the old colours and with a USB interface (my old IBM keyboards, one from 1987 with the square silver logo, all run over PS2 to USB dongles). The choice was made, and it was an APL keyboard, that combined the right colour, interface, availability and price. Also, it could be sent from a UK shop, which avoided high shipping cost and cumbersome customs forms.
I could not imagine that just the return of the squiggly math signs on the keys would bring back so many memories. Because I had missed those for some 25 years (the terminal was changed for a 3270 PC somewhere down the road, and then to a real PC with emulator software) I decided to look into APL.
Working on an Apple Macbook pro for years already, the first problem announced itself quickly: I could not get all the keys to display the APL characters. I installed several fonts, but all (mis)behaved in the same way. These special fonts have the same approach: shifted characters follow the APL layout, and starting from the left of the keyboard the keys are ok, up to a certain point, on the top row starting from the - and = keys, and likewise on the lower rows.
The original plan was to use the open sourced 1966 IBM APL, running on MVT. Its installation procedure, however did not work on macOS and I left this for later. Multics APL is also available, but it suffers from a (recently solved) problem in the DPS6180 emulator.
Things started to come together when I installed a free version of the Dyalog APL system. This got the keys on the Unicom APL keyboard right! Only thing was, one needs to prefix them with a backtick, and the current version tends to grab a whole cpu when left idle. But the great news was that it proved possible to run APL from an APL keyboard on the MacBook Pro.
Reading the Dyalog website I found the missing link: the keyboard, when used on a Mac, needs a special set of keyboard layout icon files (downloadable from https:www.dyalog.comapl-font-keyboard.htm) that needs to be added to LibraryKeyboard Layouts - then, in the settings dialog, these can be chosen as a locale. When this is active, the keyboard can be used with full APL functionality in all applications, with all Unicode fonts that contain APL characters. IBM Plex Mono, for example, has excellent support. The APL characters are then accessible in combination with the option key, and from the Unicom APL keyboard in combination with the left Windows key.
For practical reasons I run APL now from a self built version of Gnu APL on a Raspberry Pi on 64-bit Ubuntu, and also with Dzaima APL, which is an implementation in Java 9, from iTerm2 on the Macbook Pro, and slowly learning APL, which is an amazing experience.
L'eau rendue flot  15/06/2020
I have already used such a US QWERTY keyboard as a student especially for Matlab then, which came after APL (check about IBM 1130, IBM 5100 (5150 = original PC)). Then I have known of the Model M for the last few years.
Given the ANSIISO mechanical layout (optimised for right-handed people), this mechanical keyboard is marvellous : comfortable*, durable owing to its elegant simplicity and handmade in a Western country.

It is a chance to find new still in 2020 the keyboard talon (+3 keys of 1995) and to support the perpetuation of this know-how and IBM's R&D in ergonomics since they entered the typewriter market nearly a century ago...
Once purchased, it shows visible quality and robustness: very well packed and no problem during shipping... feet are soft to turn if you need and you have the 2-part keycaps... no concern at all!
+ The modifier keys on the right are logically re-ordered. That is, from the space bar : GUI shell, Alt (Application menu in ANSI QWERTY (but Alternate graphics in ISO AZERTY)), item (contextual menu), Ctrl (control character for command whether alone or in combination with Alt).

APL symbols are... (Big) Blue, of course... and so are lock LEDs either! = One's needs white lighting (so not coloured RGB LED) during day to appreciate these bicolor keys with Pearl background (colour more complementary than grey)... I have not seen any discrepancy with respect to the Dyalog US APL layout.

*Even if I am accustomed to low-travel scissor on rubber-dome switches keyboards too, now I understand how much typewriters could exist and sell (with scarce use of the Backspace key): I make less typographic mistakes with this Model M no matter when the beast of typing productivity is unleashed out of a pseudo-princess world (but in such one back in 1985 as Model M was considered silent at its release) even feeling using the Force or kind of it with tact(-ile feedback) - no excess of course mais c'est la folie quand mme ! That is I am not prevented from playing (with an instrument, not a game) more forte than piupiano (on the low-profile) regardless in AZERTY or QWERTY in order to reach my best speed writing the part and reading it. My fingers bounce back and I can also retype a key before releasing it completely like with a repetition lever (double escapement action).
In fact, this way, the delay to retype should be shorter as the spring is no longer buckled but shorter than when the key is completely released... thus forcing more the hammer back.