All costs are in UK pounds sterling and exclude VAT

Should you need a personal quote for a large order drop Martin a line, or give us a call weekdays between 9am and 5pm.

Now enter your order number, and click track, this should dispaly the tracking results for your order.

The Cherry MX key switch is a self contained key switch composed of a body, a spring, a stem and gold crosspoint contacts.
The switch itself has a black body and the stem (the part that moves) comes in different colours depending on the switch type.
The switch type is usually referred to by the colour of the stem.
Cherry MX Brown 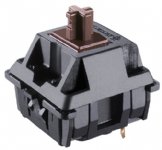 The Cherry brown switch often called tactile or ergonomic, travels 4mm, at 2mm there is a bump and past this the switch actuates. The switch needs 55cN of force to get over the bump.
Cherry MX Blue 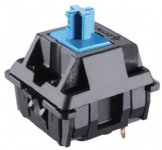 The Cherry blue switch often called click, travels 4mm, at 2mm there is a bump and past this the switch actuates with an audible click. The switch needs 60cN of force to get over the bump.
Cherry MX Red 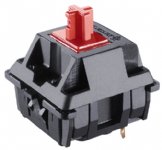 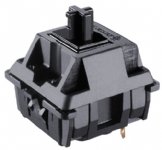 The Matias switch is similar to the Alps mechanical key switch it is a self contained key switch composed of a body, a spring, a stem and contacts.
The switch itself has a transparent body and a white, grey or red stem.
Matias Click Switch

The Matias Click Sactuateswitch travels 4mm, at 2mm there is a bump and past this the switch actuates with an audible click. The switch needs 60cN of force to get over the bump.
Matias Quiet Click Switch

The Matias Quiet Click switch travels 4mm, at 2mm there is a bump and past this the switch actuates. The switch needs 60cN of force to get over the bump and is one of the quietest mechanical switches.
Matias Quiet Linear Switch

The Matias Quiet Linear switch travels 4mm, at 2mm the switch actuates. The switch needs 35cN of force to actuate and is one of the quietest mechanical switches.

Topre capacitive key switching is based on the same technology as a smart phones screen, it consist of a stem in a housing over a rubber dome over a conical coiled spring over a printed circuit board.
The switches are discrete components, but built as "sheets", and are available in different weights. We sell 45g and variable force Topre keyboards.
Topre Capacitive Switching 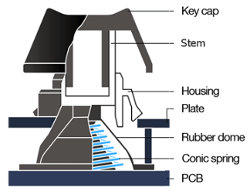 In essence, the Topre switch feels first like a refined rubber dome and second in some ways reminiscent of some mechanical-contact switches such as the Cherry MX Red. The switch action is very smooth, with a tactile bump that you can feel near the top of the stroke. After the bump, the resistance is almost flat, and you can not feel the mid-stroke actuation point.

Unicomp keyboards use buckling spring technology this refers to the fact that the coil spring tensed between the keycap and a pivoting hammer buckles, i.e. kinks or collapses, at a certain point as it's pressed down, providing auditory and tactile feedback to the keyboard operator. Upon buckling, the hammer is pivoted forward by the spring and strikes a membrane sheet which registers the key press.
Unicomp (IBM) Buckling Spring

The buckling spring switch travels 4mm, at 2.3mm there is a tactile tap as the spring buckles and the switch actuates with a loud audible click. The switch needs 70cN of force to buckle the spring.

60%: A style of keyboard which is about 60% the size of a full-size keyboard, by means of omitting the top function row, the navigation cluster and the numeric keypad. Access to the missing keys is typically achieved through a Function layer. The Filco Minila is an example of this style.

ABS: a material used for keycaps, provided by default on most Cherry MX keyboards (including Filco and Max Keyboard) and also available as standalone keycap sets. ABS keycaps are generally lighter than their PBT counterparts.

Actuation point: the point at which a key press is recognised by the keyboard. The amount of force required to reach this point is used as a measure of the switch’s stiffness.

Alps: a mechanical switch that was once produced by a Japanese company of the same name. Today, the switch is out of production but has been adapted by companies like Matias into their own switch designs.

ANSI: the standard physical keyboard layout for the United States and the Netherlands, among some other countries. Modern full-size ANSI keyboards generally have 104 keys, including wide Enter and left Shift keys.

Buckling spring: a loud and heavy mechanical switch that uses a large spring that buckles at the actuation point, hence the name. Used by IBM in their Model M, and has since become rather rare. Modern equivalents are produced by Unicomp.

Click: a keyboard or switch that makes an audible “click” sound when pressed. Clicky switches often include a tactile bump as well (see Tactile). Examples of clicky switches include Cherry MX Blue and Matias Click.

Debouncing: as a switch reaches its actuation point, it will bounce around a bit before it comes to rest. Debouncing is the act of correctly interpreting when a key is pressed, without reporting multiple actuations. This is largely a solved problem in modern keyboards.

Full-size: A full-format keyboard, which includes a numeric keypad (for the opposite, see Tenkeyless). Also called by the number of keys included (e.g 105-key for a full-size British keyboard). The Filco Majestouch is an example of this style.

Ghosting: an issue where pressing a combination of three or more keys results in the registering of an addition, unpressed key. Ghosting is prevented by manufacturers by blocking any keys which might be ghosts, but this limits the number of keys that can be pressed simultaneously. See Key Rollover.

ISO: the standard physical keyboard layout for most of the world, with the notable exception of the United States and the Netherlands (see ANSI) and Japan (see JIS). British, German, Spanish, French and Nordic are all examples of ISO layouts, although each has a different logical layout (e.g. the first six letters are QWERTY in the UK and QWERTZ in Germany). Modern full-size ISO keyboards have 105 keys, including tall Enter keys and small left Shift keys.

JIS: the standard physical keyboard layout for Japan (for western layouts, see ANSI and ISO). A modern full-size JIS keyboard has 109 keys, including additional keys to the left and right of the shortened space bar, in order to facilitate entry of characters from various Japanese alphabets.

Key Rollover (#KRO): a limit to how many keys can be simultaneously pressed and correctly registered by the keyboard, often expressed. If you press more keys than your keyboard can register, some key inputs will be missed. Low numbers like 2KRO are typical of low-cost rubber dome keyboards, while 6KRO is the usual standard for a mechanical keyboard. Some keyboards are capable of more; other common figures are 10KRO and NKRO. Modifier keys (e.g. Shift, Ctrl, Alt, Win) do not count towards this limit.

Linear: a keyboard or switch that lacks a tactile bump or click – instead, the resistance increases linearly as the key travels downwards. Examples of linear switches include Cherry MX Red and Cherry MX Black.

Mechanical: a high-quality keyboard or switch that utilises a mechanism with a metal spring in order to register key presses. Many different switch designs fall into this category, including Cherry MX, Alps, Buckling Spring and sometimes Topre.

N-Key Rollover (NKRO): a keyboard with NKRO can register as many keys simultaneously as you care to press down. See Key Rollover.

PBT: a material used for keycaps, provided by default on most Topre and Unicomp keyboards and also available as standalone keycap sets. PBT keycaps tend to wear better and have a slightly more abrasive feel than their ABS counterparts.

Rubber dome: a non-mechanical keyboard that uses a rubber dome to provide resistance and tacticality, mounted above a membrane sheet that registers the key press. Rubber domes are found in the vast majority of keyboards sold, thanks to their low cost.

Tactile: a keyboard or switch that provides feedback you can feel, normally a “bump” or sudden increase in resistance that occurs as the key reaches its actuation point. Examples of tactile switches include Cherry MX Brown and Matias Quiet Click.

Tenkeyless (TKL): A keyboard that does not include a numeric keypad, in order to minimise size and weight. These keyboards can allow for a more comfortable hand position and are more portable, a reasonable tradeoff if you do not often use the numeric keypad. The Filco Majestouch TKL is an example of this style. For the opposite of Tenkeyless, see Full-size.

Travel: the distance that a switch moves from the top to the bottom of a key press. On an average laptop keyboard, key travel is noticeably lower than on the average desktop keyboard.

Also available on our Blog.

http://www.keyboardco.com is owned and operated by The Keyboard Company (UK) Ltd.
The Keyboard Company is committed to protecting your privacy and will only use the information collected about you lawfully and in accordance with the Data Protection Act 1998.
The information collected about you is used to process your order, you can sign up to receive information, offers and our news letter but this is an opt-in service only, and at any time you can opt-out.
We NEVER pass any of your details on to third parties
The type of information we will collect about you includes:
Name
Address
Phone nummber
Email Address
We use PayPal and SagePay for secure credit/debit card processing, when you 'check out' and enter your credit/debit card details you are already in an encrypted page, your details go directly for processing through a secure connection, they are not stored on our site and are not retrievable by us.
Our website uses "cookie's" which are stored by your browser. You can usually modify your browser to prevent this happening if you prefer and cookies can be deleted at anytime by you. However if you block cookies you will not be able to add products to your shopping cart and 'check out'.
If you have any questions/comments about privacy, please contact us.